Our last full day on the Hill, and still no sign of my Big Five most wanted! I decided to go down the road to Jeriau waterfall again, and dropped in on one little patch of forest that was alive with birds for a good hour. The Red-headed Trogons were around almost constantly, both the male and female and possible a juvenile bird as well.

The female trogon, trying to hide behind a branch

And here's the male, suitably red-headed.

I caught this romantic couple being all lovey-dovey - Little Cuckoo Dovey to be precise! 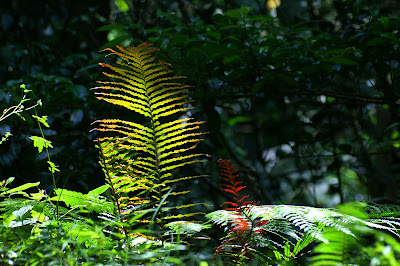 A fern in the early morning forest light.

A little flock of Blue Nuthatches spent some time around the road, but they are so fast that they're extremely difficult to get good pics of. Here are my best attempts. 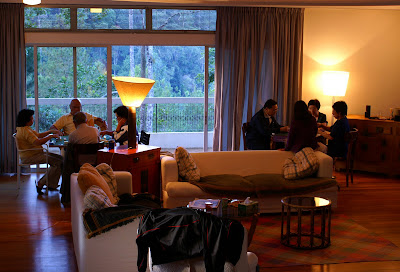 I called in at the house to see if I was being missed, but the family were into some serious mah jong, so I was able to pop out again!

I went back to the fruiting tree for a last look.

I was quite pleased with this portrait of a Mountain Bulbul.

On our last evening, my wife and I decided to have a final try for owls. On the first night I'd had a brief glimpse of a Mountain Scops Owl, but we were hoping for better. We were rewarded by a very obliging bird that came and sat in front of us four times.

The last two times it sat close and stayed for a few minutes calling. However, during the first of these, my autofocus wouldn't lock onto the bird, and I only managed a blurry shot as it flew off! Frustration!


Fortunately it came back, and I was able to use manual focus to get a reasonable shot. So - one down, four to go! Something to come back for next year!
Posted by digdeep at 1:22 pm 2 comments: Links to this post

I needed to make a trip to KKB (that's the nearest town - Kuala Kubu Baru - to give it its full name) today to fill up with petrol, so I set off early. On my way down the road to the Gap I saw a Malaysian Whistling-Thrush briefly in the headlights, and flushed an unidentified nightjar off the road a little lower down. The drive to and from KKB was uneventful apart from a Chestnut-crowned Forktail and lots of White-rumped Shamas flying up off the road.

I spent a few hours around the Gap again, hoping for parrotfinches or Bamboo Woodpecker, but again was unsuccessful, though I did see a good selection of other stuff.

An Ochraceous Bulbul in a fruiting tree.

A Tiger Shrike - possibly a 1st year male, since it shows signs of an adult male-type head pattern.

Eventually I had to give up on my target birds and head back up the Hill. Back at the fruiting tree in late afternoon the feast was in full swing.

Black-browed Barbets are common, but spectacular!


Another view from below.


And a Fire-tufted Barbet (note the fiery tuft at the base of his bill). Not sure if he's looking at me or eyeing up his next berry.

A male Grey-chinned Minivet - another common bird on the Hill. Fraser's Hill doesn't have too many dull-coloured birds!

A Blue Nuthatch - surely the weirdest of the nuthatches!

And finally, just as I had actually got into the car and was about to drive off, the Siberian Thrush arrived!
Posted by digdeep at 12:44 pm No comments: Links to this post

No trip to Fraser's Hill is complete without going out to look at the fantastic creepies and crawlies at least one night! This time we took along some friends who were suitably impressed. These pics were actually taken last year, but they show what we saw this year as well.

Here's a Funnel-web Spider enticed out of his funnel.

And a Wolf Spider on the prowl!

My favourite of the lot - a Trap-door Spider.
Posted by digdeep at 12:22 pm 3 comments: Links to this post

I decided to get down to Jeriau waterfall early to try to see the Malaysian Whistling- Thrush. I was unsuccessful in that endeavour, but did see a good selection of birds - including a female Red-headed Trogon and a pair of Slaty-backed Forktails - and hear others, including Malaysian Eared Nightjar, Lesser Shortwing and the Whistling-Thrush. 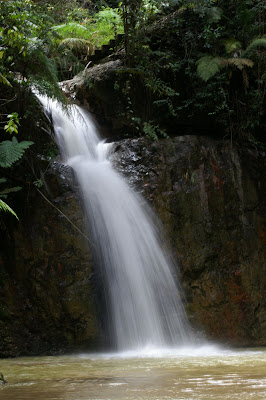 This Asian Brown Flycatcher was a nice diversion at breakfast.

So was this male Oriental Magpie Robin!

After breakfast we packed a picnic and went to visit High Pines - one of my favourite places in the whole world! A stroll around the gardens revealed the usual residents and visitors - a pair of Little Pied Flycatchers, a pair of Large Niltavas, and a stunning male Mugimaki Flycatcher. 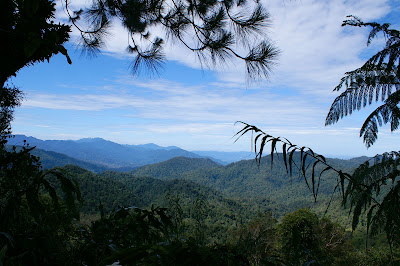 The view from High Pines can't be beat!

Even the stone bannisters of the verandah look stunning in their moss and lichen livery.


This male Large Niltava was not too bothered by my approach.

In fact, really not bothered at all!

Nor was this female Little Pied Flycatcher. It felt like a piece of the Garden of Eden!

In the late afternoon I went to the Telekom Loop, where I met Jason Tan, who, it turns out, is the distributor for Swarovski for Malaysia - a good guy to know! Check out his website. He told me about a fruiting tree by the road where he'd seen, among other birds, a Siberian Thrush. I had a look but it was a bit too late to get good pics. I made a mental note to come back tomorrow!

A Fire-tufted Barbet enjoys the last rays of the afternoon sun.

The 'Loop' was crawling with Sultan Tits this evening, splendid creatures in regal colours!
Posted by digdeep at 11:11 am 1 comment: Links to this post

A trip to Fraser's Hill has become an annual tradition for our family whenever we have been in Malaysia, ever since we spent part of our honeymoon there in 1990. We must have made well over 20 visits, and have lost count of how many different places we have stayed since my own first visit in 1987, when I stayed with the famous Nash, and sampled his legendary curries.

Nash is now long gone (to Australia somewhere), though not forgotten, and there have been many other changes in the last 20 years. Still, Fraser's retains enough of its original charm to draw us back year after year. Another reason for going is that my wife's family have the admirable taste and sense to organise the family reunion at Chinese New Year there every year, and this year was no exception. So our visits are a great combination of catching up with the family, enjoying some great cooking, and yet still losing weight due to the cool weather and many temptations to spend most of the day outdoors!

Over the years there have not been too many birds that have eluded me, so I decided to focus my attention this year on looking for the few that have - namely Marbled Wren Babbler, Pin-tailed Parrotfinch, Bamboo Woodpecker, Ferruginous Partridge and Mountain Scops Owl. The first four of these five don't actually occur on the Hill itself, and are most likely to be encountered down at the Gap and on the road up to the Hill, so that's where I spent most of my time.

This first morning of our visit was somewhat cloudy, with rain setting in later in the morning, making conditions for photography less than ideal.

Black Laughingthrush is one of the special birds one hopes for on a visit to Fraser's. Several flocks were much in evidence around the Gap.

Chestnut-capped Laughingthrushes, on the other hand, are ubiquitous and impossible to miss.

This Black-bellied Malkoha was a nice contrast to the Green-billed photographed a few weeks ago in Kelantan. Shorter-tailed and slighter-billed, this species also lacks the pale surround to the red orbital skin of Green-billed.

Chestnut-backed Scimitar Babbler isn't a species you see on every visit, so I was pleased to photograph this bird - one of a small flock foraging about 1km up from the Gap.

It's odd how on certain visits some species will turn up everywhere and on others seem to be completely absent. This visit will be remembered for the number of trogons seen and heard. The first of these was a pair of Orange-breasted Trogons that spent 20 minutes hunting for insects close to the road up from the Gap. Here's the female. 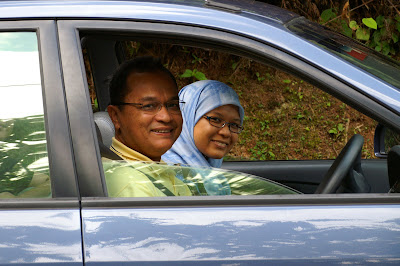 Most birds have distinctive calls, but this species really called attention to itself! There I was quietly going about my business when I heard someone calling my name. It turned out to be none other than fellow birder and blogger Dr Naim Yunus (and family!), on their way down from the Hill. Some smart spotting on his part and a good 'lifer' for me! Check out Naim's blog

Not the greatest picture, but this shot of a White-hooded Babbler was the fruit of several hours spent looking for parrotfinches and Bamboo Woodpecker in some bamboo stands about 2.8km towards Raub from the Gap.

In the end, despite hearing drumming from a stand of bamboo, Ferruginous Partridge calling way up some inaccessible hillside, a Marbled Wren Babbler heard once only, and some small passerines feeding in bamboo which I couldn't get binoculars onto, I had to concede defeat on my quartet of wanted birds for the day.

The afternoon was spent very civilizedly enjoying cream tea at the Smokehouse with my family, where I got this amusing shot of a Long-tailed Sibia.
Posted by digdeep at 9:57 pm 2 comments: Links to this post

I spent a couple of not very romantic evenings up my middle in mud, helping a team of scientists from the local university to trap shorebirds at my local patch!

We set up mist nets at dusk to trap birds as they flew to roost at high tide. It was fun but very exhausting!

We managed to catch 6 Redshanks, a Common Sandpiper, a Curlew Sandpiper, a Broad-billed Sandpiper, a Terek Sandpiper, one Lesser and one Greater Sansplover, and 3 Little Herons. We also caught around 20 Dog-faced Fruit Bats and 1 Cave Nectar Bat - sharp-toothed little beasts! 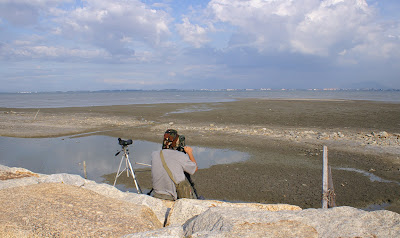 Checking out the mudflats with the evening sun behind us. 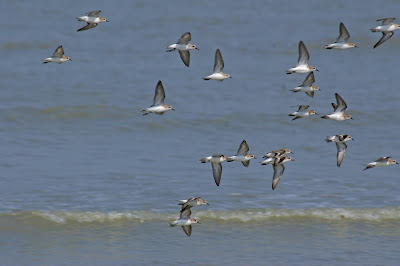 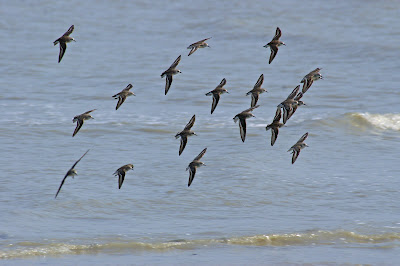 A couple of shots of a flock of Red-necked Stints flying in perfectly co-ordinated formation. 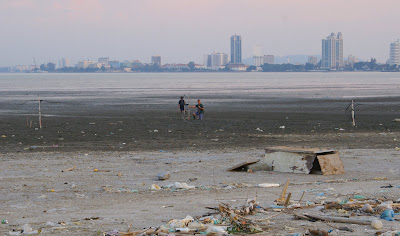 Setting the nets before dusk 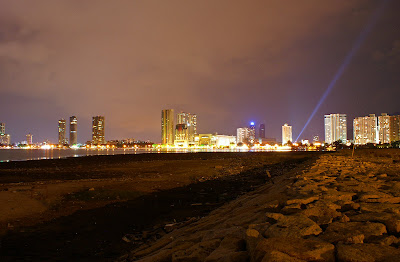 The mudflats by night - lots of ambient light, so not ideal for trapping birds.

Lesser Sand Plover in wing moult.The inner six primaries are fresh and full grown. 7 and 8 are still growing, and the outer two, 9 and 10, are old unmoulted feathers.

Measuring the bill length, from the base of the culmen to the tip.

Measuring the head and bill length, from the rear of the skull to the tip of the bill.

Measuring the nalospi, the distance between the tip of the bill and the distal edge of the nostril. 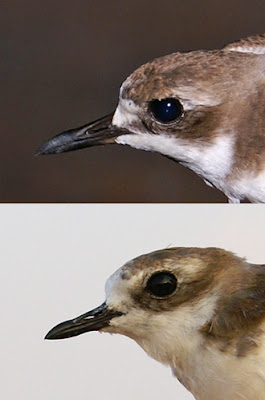 A good comparison of the bill shapes of Greater (above) and Lesser Sand Plover. Note that the 'nail' (bulge on the culmen) starts about two-thirds of the way along the bill of Lesser, but about half-way along in Greater. The tip of the Greater's bill is also noticeably sharper and less blunt than that of Lesser.

Another shot of the Greater Sand Plover, showing the olive-yellow leg colour, which tends to be a good distinguishing feature of this species.

A Broad-billed Sandpiper showing off its broad bill!


Terek Sandpiper. Note the deformed toes on the left leg.
Posted by digdeep at 3:24 pm No comments: Links to this post