A bit of a long silence lately - I've been out visiting a number of oil palm plantations - courtesy of one of the larger plantation companies. They want to identify and develop plans to conserve the natural habitat and wildlife that exist on the estates. Here's a selection of the fauna and flora I managed to photograph.

Some species seem to do really well on the estates; Black-shouldered Kites seem extremely common, and several nesting pairs were found.


Purple Heron is another species that occurs commonly in the swampy areas.

In the mature oil palm, Barn Owls do really well, aided by the nest box scheme run by the estates - one is placed every 10 hectares - and the result is natural control of rats and other rodents that feed on oil palm fruit.

Large-tailed Nightjars are also common in the mature plantations. 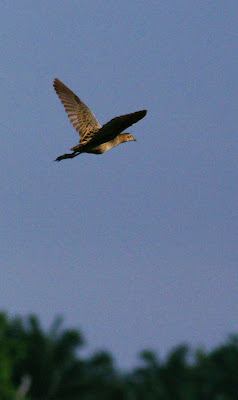 And the swampy areas provide a wonderful haven for migrant waterbirds such as Watercocks.


The mangroves provide roost sites for waders such as Common Sandpipers.

And here's a rare mangrove specialist - a Great Tit! It's a common garden bird in much of Europe, but here can only be found in mangroves. Can it really be the same species?


Some other wildlife: two of a large family of Smooth Otters we saw along the river. These are large otters, much larger than Eurasian species. 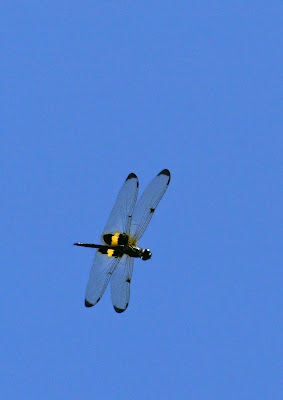 Rhyothemis phyllis, a common dragonfly, cruises around in the midday heat.


And here's a Mangrove Skink, a species that exists in Asia only on the west coast of Malaysia, and on Singapore and Penang islands. 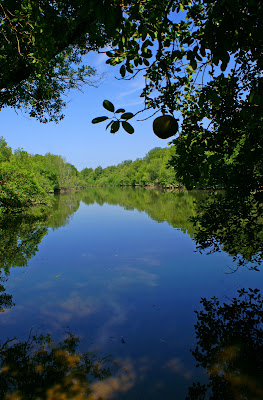 A fruiting Xylocarpus granatum tree overhangs a river bank thick with mangrove; a real treasure of the plantation, and one well worth preserving.
Posted by digdeep at 2:45 pm 1 comment: Links to this post 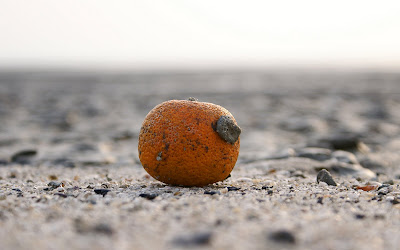 Way back in September last year I entitled a post 'The waders are coming!' Perhaps I should entitle this one, 'The waders have gone!'

The most prominent feature of the mudflats over these last two days has been oranges! Over the weekend the 15th day of Chinese New Year, or Chap Goh Mei, as it is known here, was celebrated by hundreds of young people throwing oranges into the sea, apparently in the belief that it will bring success in romantic endeavours! I don't pretend to understand exactly how, but it seems like a waste of perfectly good oranges to me! 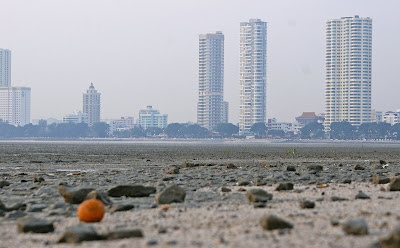 Anyway, more to the point as far as the waders are concerned, Chap Goh Mei is the first full moon of the Chinese New Year. It seems that the full moon and the clear skies that accompanied it was the signal for the Big Departure to begin. In contrast to the tideline thronged by thousands of birds last Friday, the mudflats were eerily empty - except for the oranges - yesterday and today! 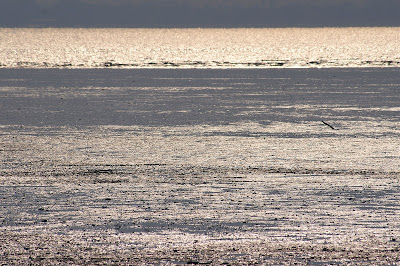 Yesterday, at the main roost site, I counted:

A flock of 210 Pacific Golden Plovers rested briefly on the mudflats before taking off and immediately ascending to a great height and setting off northwards at 1540. Another sign of 'vis mig' (visible migration) was a steady stream of Barn Swallows - 2 or 3 every 10 minutes or so, flying northwards over the mudflats.

The Redshank roost area still had its regulars, plus a couple of new Black-tailed Godwits:

The godwits were starting to show signs of breeding plumage. Another bonus was a leg-flagged Redshank, black above green on the right tibia (just as the bird seen on October 6th last year, which was ringed in southern Thailand). It was surprisingly difficult to see the leg flag. If the bird tucked its right leg up into its body, or if another bird stood in front of it, it was easily missable. This made me wonder whether the bird is a genuine new arrival, or whether it has in fact been here the whole winter.

This morning I was at the site at dawn. I heard Terek Sandpiper and Whimbrel before it was properly light, but these were obviously just passing birds, as a daylight count revealed even fewer birds than yesterday - 6+ Kentish Plvoers and 10 Red-necked Stints. Another largish flock of Pacific Golden Plovers (c270) flew high northwards at about 9.30am. There was a solitary Yellow Wagtail on the mudflats too.

So is that it then? Is that the last of the large wader numbers at Tanjung Tokong? Already the construction has made the original roost site on the red earth no longer suitable. The mudflats are growing increasingly polluted and disturbed. I watched a group of Myanmarese labourers harvesting fish from a net put up overnight today; a reminder of the richness of this habitat, but also of the intensity of the pressures it is subject to.

What will the site look like when it is time for the waders to head south again in four or five months' time? Hopefully there'll still be a place for them at Tanjung Tokong.

A resident Paddyfield Pipit which won't be leaving just yet!
Posted by digdeep at 10:30 pm 1 comment: Links to this post 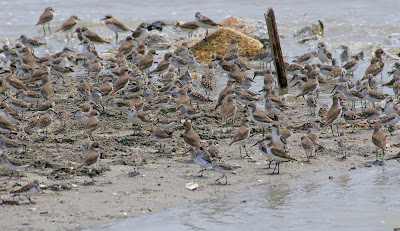 Part of a high tide roost made up mainly of Lesser Sand Plovers and Broad-billed Sandpipers.

Happy days are here again! What a change from two weeks ago, which was the last time I visited the site. Lots of waders, and quite a number moulting into their stunning breeding plumage.

It was interesting to see which species were represented - there were significant changes in the relative abundance of species. Broad-billed Sandpiper, which I have usually recorded in single figures, was the second most numerous species present today, whereas there were no Pacific Golden Plovers at all. Here's my full count:

I experimented with a new way of counting today. I took several pictures of the roost panoramically, then counted the birds on the computer, making allowances for overlap between pictures. This allowed me to make a very accurate count. I also made an estimate of the total number while on the field, and, rather than count each species, made an estimate of the relative abundance of each species as a percentage of the total. When I comapred my computer count with my field estimations, I found that the two matched pretty well. 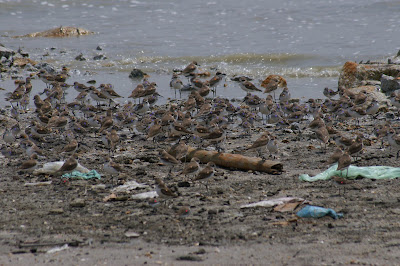 An example of a count using the computer. To avoid double counting, I marked each bird with a colour-coded dot (Lesser Sand Plover = beige; Greater Sand Plover = orange; Broad-billed Sandpiper = purple; Curlew Sandpiper = yellow; Red-necked Stint = red). Try doing an estimate of the total number of birds in this picture, and of the relative abundance of each species. Then scroll to the bottom of this post to find out how accurate you were! 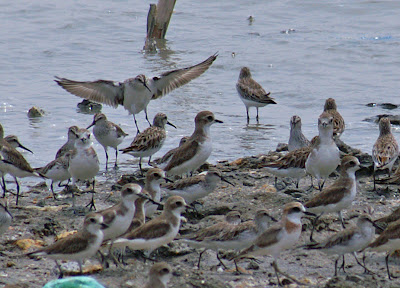 This Greater Sand Plover really knows how to stand out in a crowd!

Four species here: Greater (next to the bird raising its wings) and Lesser Sand Plover, Broad-billed Sandpiper and Red-necekd Stint.

It was great to catch up with the overwintering Little Stint again today, as I hadn't see it for quite a while. (For a full summary of what I'm basing my identification of this bird on, see January 21st, by scrolling down here.) It seems to be in head moult, as the supercilium is now almost absent behind the eye. I hope it hangs around long enough to acquire some breeding plumage body feathers. Some of the Red-neckeds are already showing extensive brick-red, pale fringed throat feathers.

This isn't the greatest picture but I include it here to show how easy it is to pick out the Little Stint among Red-neckeds at distance. It seems like a stint on stilts, and it's always actively feeding. The Red-neckeds seem much more sluggish feeders.

This picture shows the distinctive small head and round-chested, rather ball-shaped body in comparison with a Red-necked (on the left).

This picture shows the differences in leg and bill length and shape well. Both the tarsus and the tibia seem longer than on Red-necked.

A view of the plumage features (Little Stint on the right). The supercilium now seems rather diffuse and only visible in front of the eye.

Watch this space! Hopefully it'll stay around for a while longer.