Today was a day of awesome birds and awful photos! There was a morning high tide this morning, so I decided to go over and do a count of the Teluk Air Tawar area for the Asian Waterfowl Census.

I got to Penaga paddyfields at about 8am and heard an unfamiliar song coming from the paddies. I quickly located the singer - a Rusty-rumped Warbler (I still prefer Pallas's Grasshopper Warbler, even though the bird sounds nothing like a grasshopper!). I spent some time trying to photograph the bird, and in doing so, came across three Black-browed Reed Warblers as well. I got the impression that there were more Rusty-rumped Warblers singing, but couldn't see or hear more than one at a time. The paddies were abuzz with warblers, with a few Oriental Reed Warblers and Zitting Cisticolas chasing the reed warblers out of their territories. 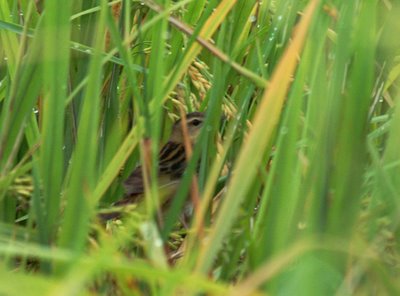 A Rusty-rumped Warbler tries to sneak away from me. 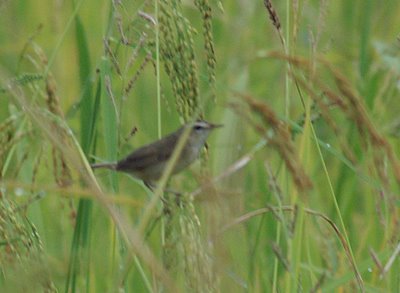 A lousy picture of a Black-browed Reed Warbler!

At Bagan Belat there were almost no waders in evidence, probably due to a couple of fishing boats close inshore. I drove along toward Bagan Tambang, stopping every now and again to scan the shoreline. At Warung Skot Din there was a small group of Redshanks with a lone Nordmann's Greenshank, but again, numbers were lacking. Finally I arrived at Embun restaurant, to be greeted with a shoreline that was white with shorebirds. The tide was not particularly high - 2.1m, but it turned out to be ideal for a count.

There was one substantial flock, mainly of plovers, close by on the hard mud, and the shoreline was thick with birds, as far as I could see in both directions. It was the biggest flock of waders I've ever seen there. 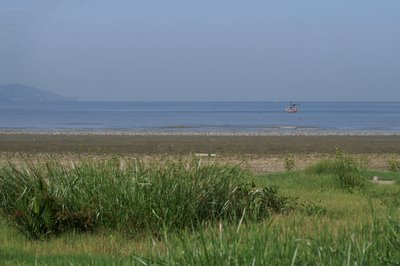 A shot from the restaurant, showing the nearer and the tideline roost.

I did a preliminary count from the restaurant, and then decided to try to get closer by making my way through the mangroves. The mud was firm underfoot but the trees were densely packed, and several were home to red ant colonies, so I got well-bitten!

Eventually I made my way out to the outer fringe of the mangroves, were I was able to get a reasonable view of the birds. I spent about three hours perusing the flocks. Every once in a while a RMAF helicopter would put all the birds up - truly an awesome spectacle, and quite useful for 'reshuffling the pack'. Even so, the birds were so tightly packed that it was easy to miss birds. Even though there were so many birds, the variety was rather limited, with no knot or godwits of any species. The highlights were a male Ruff, 10 Nordmann's Greenshanks, 5 Eastern Curlew, and a Grey Plover, which I didn't 'see' until I looked at my photos afterwards! 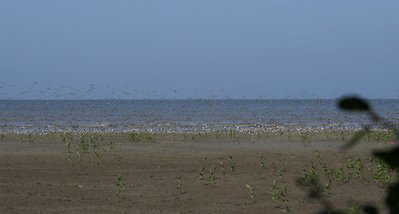 How many Spoon-billed Sandpipers did I miss in this lot? Not for lack of searching! 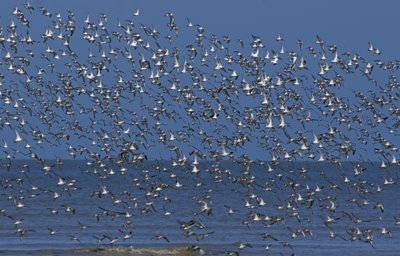 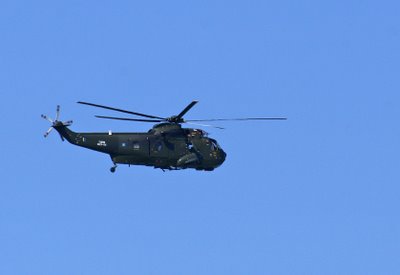 Here's the cause of it!

Here's my final count, which was a best estimate given the enormous number and density of birds:

Four Eastern Curlews (one far right) among a flock of Eurasians.

A group of Nordmann's Greenshanks, looking ghostly pale against the mud. 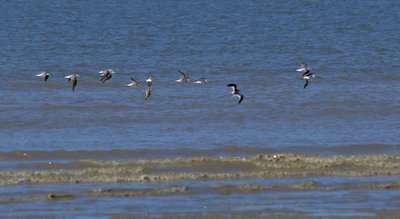 Nine Nordmann's Greenshanks with a Terek Sandpiper and a Redshank. Their practically unmarked white tails are striking in flight.

I promised in an earlier entry to post a photo of the underwing of Nordmann's; this may be the best I'll get! 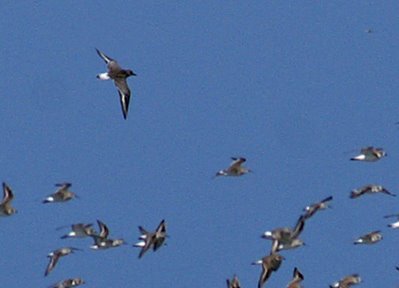 A Grey Plover (top) that I didn't spot or hear in the field, only on my photos! It's a Penang tick for me, but can I count it??! 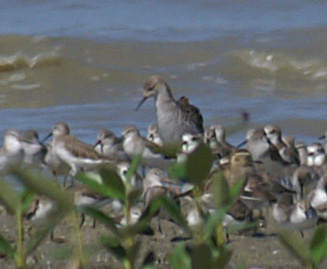 Head and shoulders above the rest; this male Ruff towers over the surrounding waders. 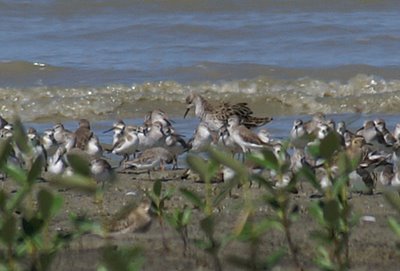 Ruffs have a curious characteristic of often raising their mantle and scapular feathers.

It had already been a great day, but I decided I would drive over to Sungai Dua, where I hoped I would find some padi being harvested, which always attracts insectivores like hirundines and wagtails, and raptors too. I located a harvester soon enough, but as soon as I set up to watch, the machine broke down! I managed to get brief flight views of a Watercock and Slaty-breasted Rail, and distant flight views of 5 Black Kites. 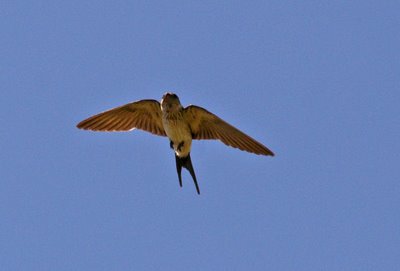 One of several dozen Red-rumped Swallows around the harvester.

They didn't look like fixing the machine in a hurry, so I drove off in search of other excitement. As I was driving, I saw a Purple-backed Starling land in a small fruiting shrub next to the road. I stopped and waited for it to emerge. As I did so, I noticed a bird hop up from the base of the tree and perch momentarily on a branch in the shade of the tree, before flying out of view into the next shrub. It was only the briefest of glimpses, but I recognized the species from my birding in the UK as a Eurasian Wryneck! A long wait ensued, but it failed to reappear and I began to wonder if I had imagined it! I decided to get out of the car and walk along the drainage ditch it had dived into. Almost immediately the bird flushed and flew past me into a further tree, where I was able to get some distant shots of it perched. 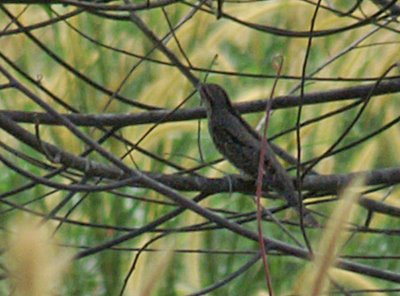 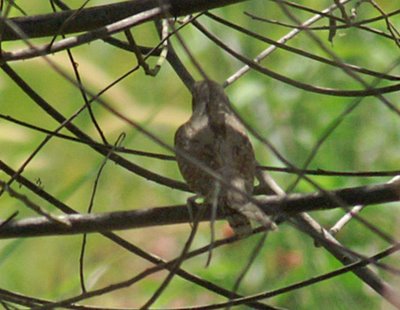 Showing the characteristic dark brown 'diamond' on the back and nape. Note also the barred tail. 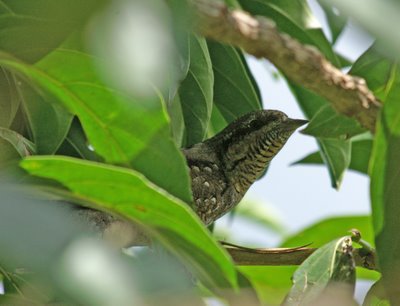 The bird was distinctly furtive, but eventually gave itself up for a couple of decent pics. 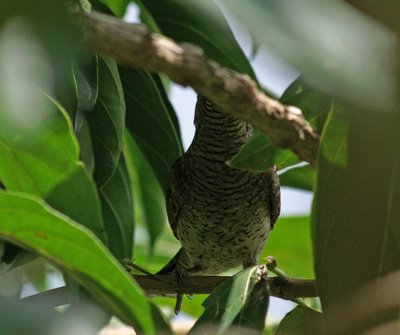 One more shot showing the underparts.

After taking this shot I was not able to relocate the bird, despite searching up and down the ditch several times.

When I got home I was amazed to find that the species is not recorded as occurring in Peninsular Malaysia. After birding in Malaysia for many years and not finding any 'firsts', I have now seen potentially four in the last six months - Small Buttonquail, Aleutian Tern, Rosy Minivet and now, Eurasian Wryneck. I guess birding in the north of the country, where there are relatively few birders, has its benefits.

A friend once asked me whether becoming a Christian got me more 'ticks'! I can't say that it ever has, but, having said that, I have made it a habit in the last year or so of asking God to show me what He wants me to see and to teach me what He wants me to learn whenever I go birding, not just in terms of birds, but through all of His creation. So I feel I should give credit where credit is due for this amazing succession of sightings!
Posted by digdeep at 6:08 pm

Looks like you had a lot of fun. Seeing the Eastern Curlews is a good sighting. I have only seen one here.

It is really surprising that you'd have a Wryneck all the way down there.
Since global temperaturs are going up one would think the birds would prefer it a lot further North! Ha! Good one!

In all labour there is profit the proverb tells us. Since your senses are attuned to the avian world He is able to bring things to your attention.

Seems to me that you could do with a longer lens. What r u using now?

Thanks for your comments. I'm using a 100-400mm zoom, like you I believe? I'm happy with it, but there will always be birds further away than you'd like!

I look at your website 'Dig Deep' with amazement, and I like to answer your pics at BirdForum.
But to find that you are a Christian really filled my heart with deep joy!
Must say that the freedom you offered in your replies gave me the thinking how it could be, a guy like you offer such ease to a fellow birder, now I know, you have the same Company!!

Likewise - I am very happy to know that we share a
relationship with the same wonderful Dad and joy at
His creation!

I have very much appreciated your comments on the
snipes - I find them a struggle - so thanks very much
for that!

Yes, I became a Christian about .... er... 18 years
ago. Been birding for longer than that, but I gave up
my birding for about 10 years, as I felt it was what
Jesus was asking of me. Now He has given it back, and I am really
enjoying it - together with Him this time!

Look forward to reading more of your posts!

I had been an atheist for 18 years before I converted in 1996. In 1992 I already decided not to become a mercenary (adventurous?), but the exact night of that descision, the enemy, which existence I denied equally with that of any spirit (God is a spirit)started its terror.
In 1993 and 1994 I lived in Israel (birding) and the Lord showed me some facts I only could understand by faith in the Scriptures or the Word and the spiritual ability of man ( so afterall, I am not an ape), which I remembered after conversion in 1996 onwards. This pleads strongly against a bias opinion, since atheism accuses faith as such.
Sadly I lost my place as a student at University, Biology in that year, since I was fully taken with my mind to consider eternal matters and salvation ( I thought I had to die (temporal)because of a uncurable disease. The evil one that attacked me, made me realize that the soul of man might be eternal (so I feared eternal death)and I knew nothing about my personal redemption or any atonement yet!)
In 1996 I received a Bible by His providence and was taken in by Ephesians 6:10-18.