TTI've put off posting this blog entry for a long time, trying to make sense of the many harrier plumages I observed during a couple of visits I made to a harrier roost in Ulu Dedap ricefields, Perak on 23 and 24 Feb, and an earlier visit on 7th Feb

I don't profess to be an expert on raptors, so this analysis will certainly benefit from the insights of those further along the road than I am! I found very little online about aging Eastern Marsh-harriers, although I did come across this rather excellent guide to Western Marsh-harriers and an accompanying one on Hen Harriers. I have also learned quite a bit from correspondence with Dr Chaiyan Kasorndorkbua, who has an id guide on S E Asian raptors in the pipeline (which we await eagerly!), and Terence Ang, our local raptorphile.

Apparently, Eastern Marsh-harriers take 4 years to reach adult plumage. However, after examining my pics repeatedly, I find that they divide into 3 rather than 4 distinct groups. Because I'm not sure at this point how these correspond to normal age classes, I'll group them according to 'Type 1, Type 2' etc, where Type 1 = adult plumage, Type 2 is the plumage before adult (presumably 3rd year), and Type 3 are younger than this. All Type 3 birds appear to have a complete set of juvenile remiges, which would age them as 1st winter. The obvious gap here is that I cannot find any 2nd winter birds (ie birds that appear to have undergone a complete post-juvenile moult). Whether this is a coincidence, or indicative that I've made some fundamental mistakes in aging these birds, perhaps I will learn after publishing these pics! 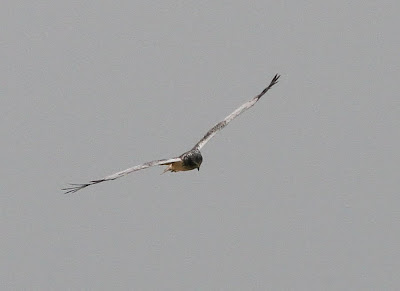 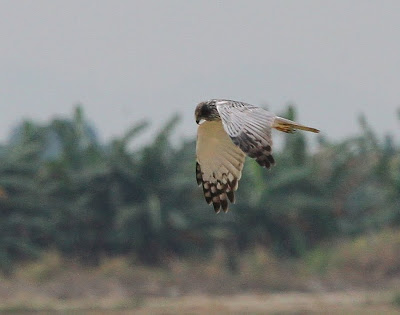 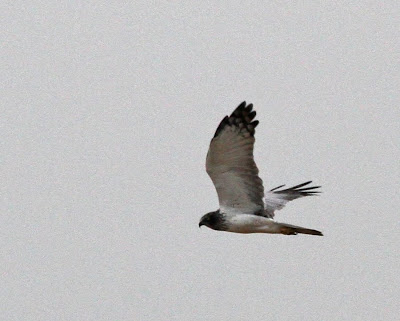 These are generally straight-forward. However, there is a good deal of variation in the intensity and colour of streaking on the head - perhaps related to age. The darkest-headed birds could be mistaken for adult male Pied, while the palest might resemble male vagrant Hen or Pallid Harriers, such as this bird, which I personally am convinced is an Eastern Marsh (note the lack of dark trailing edge to the secondaries and the pattern of dark colouration on the primaries).

My feeling is that older birds become paler, with fewer brown tones. 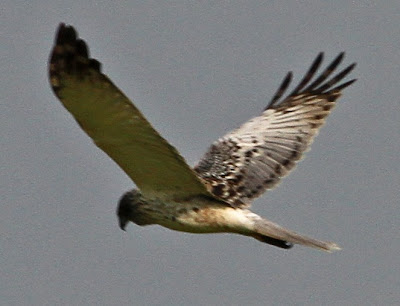 This bird shows vestigial chestnut colouring on the rear flanks, and rather obvious dark subterminal black spots on all secondaries and inner primaries. I think this is probably a sign that it's a young adult (so perhaps 3-4 years old). [Edit: Comment from Teruaki Morioka, author of The Birds of Prey in Japan: I observed the same adult male Eastern Marsh Harrier continuously for some years. The brown colouration on the underbody, (i.e. brown streaks on breast and flank, rufous bars on thigh) did not disappear even after 7 years. I’m sure the brown colouration on the thighs and the streaks on the underbody don’t always indicate immaturity. A bird with such features could be a younger adult or a full adult.] 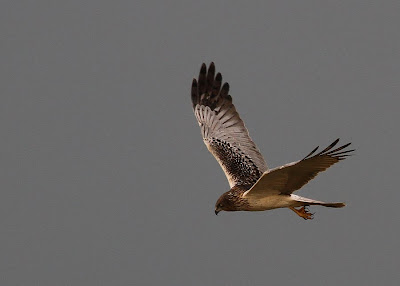 This bird has some brown in the head-streaking, but has more pure grey secondaries and pale flanks, suggesting it is an older bird 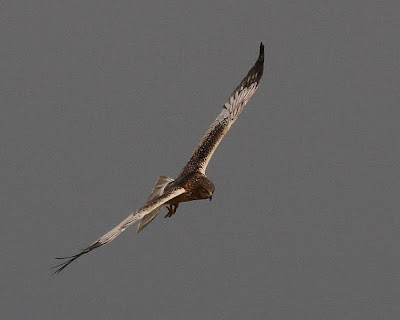 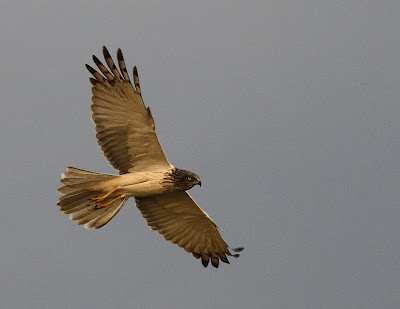 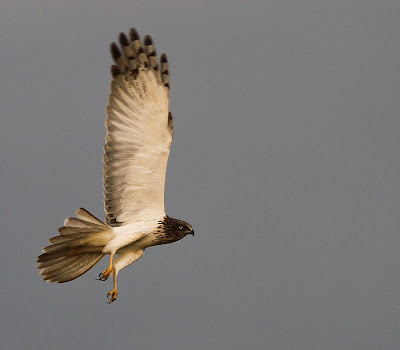 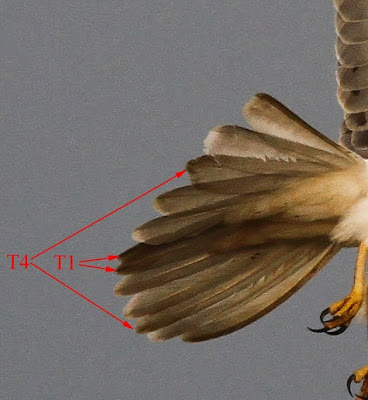 A few more shots of this obliging bird. The last one shows that it is in tail moult, with the central pair (T1) and the 4th pair from the centre (T4) being unmoulted, old feathers.

Moving backwards in age from adult to 'Type 2' males. Assuming that adult plumage is acquired in Eastern Marsh as in Western at 4 years old, these would be 3rd year birds. These can be quite tricky, as they can closely resemble adult female Pied in plumage. 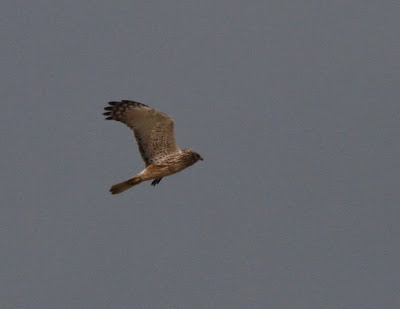 From below, they are quite straight-forward,showing white, unbarred bases to the primaries, and white background-colour to the wing coverts. 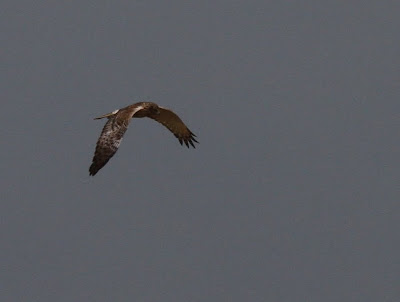 The same bird, showing the upperwing - not quite so straight-forward! [EDIT: Comment from Teruaki Morioka: I agree with your identification of this bird.]. 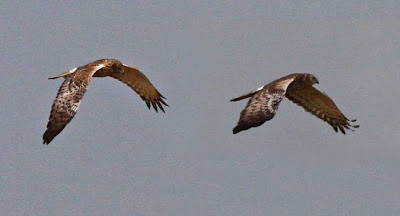 Here's the same shot with an adult female Pied inserted to the right, showing just how similar they can appear plumage-wise! Note the clear bars along the underside of the secondaries and primaries of the Pied and the unbarred white undersides of the Eastern Marsh. In the field, the structural differences are usually obvious - the smaller bill and head, shorter neck, narrower-based wings and narrow, rather square-ended tail of Pied. Eastern Marsh has a prominent head projection and hefty bill, broad-based wings and a broad, rather graduated (round-ended) tail. 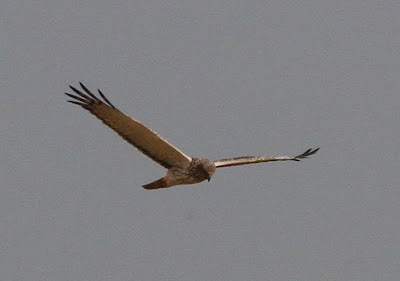 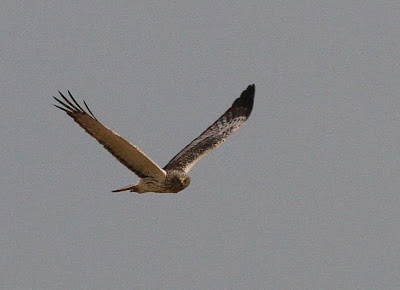 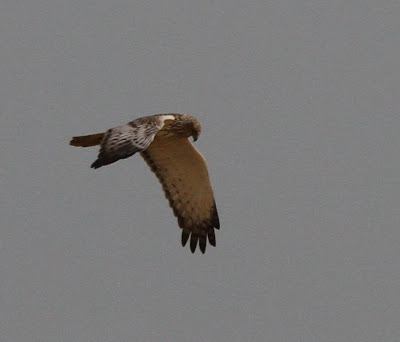 Three pictures of another Type 2 male Eastern Marsh. This one has less marked underwing coverts. Note the solid dark bar along the trailing edge of the wing on both surfaces.[EDIT: Comment from Teruoki Morioka: This is probably a fully adult male.] 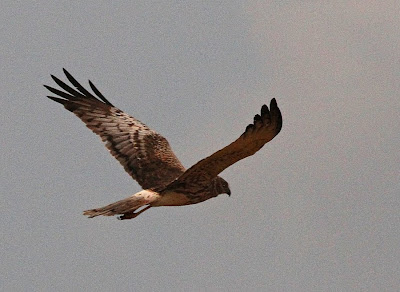 Another Type 2 Eastern Marsh. This one shows most of the classic features of an adult female Pied, including a dark median covert bar on the upperwing (like a faint version of a male Pied upperwing pattern). However, the underside of the primaries in unbarred pure white, the tail is grey and almost unbarred apart from vestigial barring on the outer tail feathers, and the head and bill are hefty. 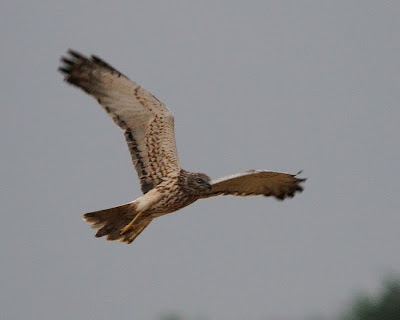 If you doubt me, here's the same individual showing the underside, and the underwing pattern is clearly that of a subadult male Eastern Marsh. 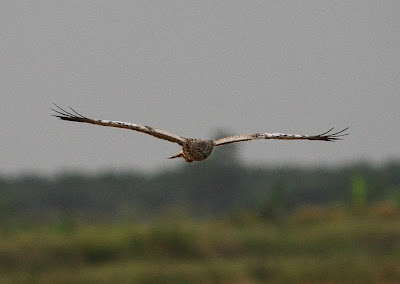 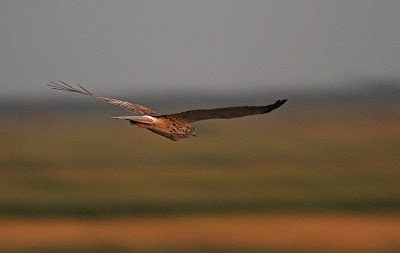 Another Type 2 male.[EDIT: Comment from Teruaki Morioka: This photo shows too few features to say anything definitive.]

Moving to Type 3 males, I'm mainly sexing these by the presence of a variable number of grey tail feathers. They have a highly variable amount of adult-type plumage characteristics such as head streaking, pale underwing coverts and upperwing coverts. However, none appear to be in wing moult, as one would expect in 2nd winter birds, but rather show uniform-aged juvenile-type remiges, which would make them all 1st winters. 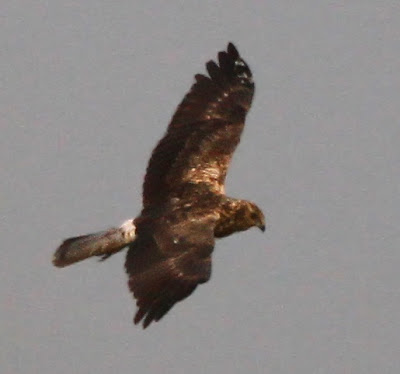 This bird has isolated grey upperwing coverts and the outer two primaries on the left wing show a pale-grey and black barred pattern. Since this pattern did not either on the underside of these feathers or on the corresponding feathers on the right wing, I think it must be some kind of soiling. The nape, crown and throat are well-streaked. 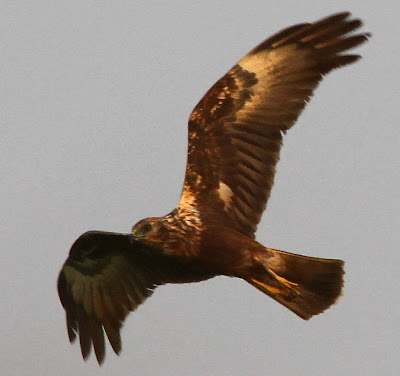 The same individual from below.[EDIT: Comment from Teruaki Morioka: This bird is a juvenile/ 1st winter. All the secondaries are pointed juvenile feathers and all the primaries are rather worn feathers which look unmoulted.] 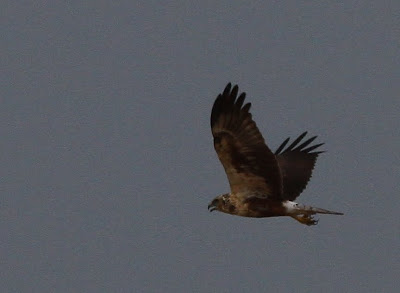 This bird had an extensively grey tail and there was a lot of pale on the underwing coverts and body. On the other hand, the remiges looked fresh and uniform, suggesting that these were juvenile feathers. [EDIT: Comment from Teruaki Morioka: I believe this bird has juvenile remiges. If so, this bird is a juvenile/1st winter bird. Some juveniles replace the central pair of tail feathers in their 1st winter. In the case of Japanese breeders, juveniles with large pale areas like this are females.] 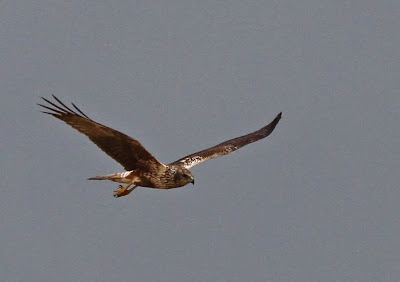 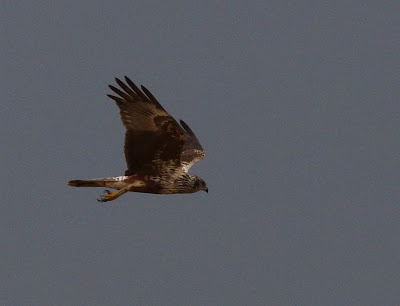 Another bird with a combination of rather developed body plumage and nice fresh juv-type remiges.[EDIT: Comment from Teruaki Morioka: This bird is a 2nd winter bird.It has already moulted at least once, but it has little grey on the remiges.] 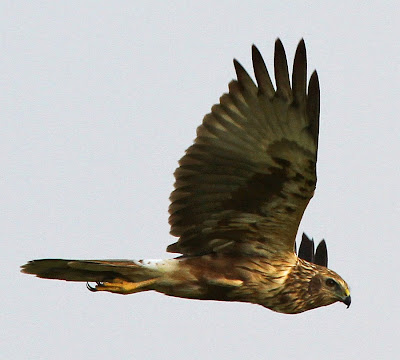 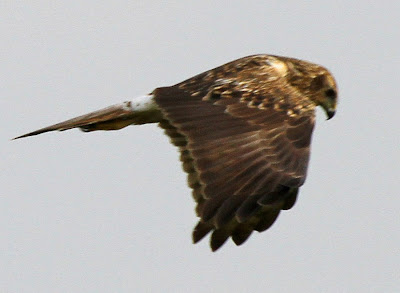 Ditto! [EDIT: Comment from Teruaki Morioka: I believe that this individual is also a 2nd winter male. The wide white wedges on the wing coverts and the growing grey tail feathers indicate a male. This bird has already moulted at least one time. A rather dark iris indicates that it is a younger bird. The iris often turns to yellow during 1st winter so is probably delayed in this individual. Assuming you took these photos in February, this bird cannot be in its 1st winter.]

Phew! That's just the males! Think I'll leave the females for another post!
Posted by digdeep at 9:03 pm