As promised, here are the males of both species, not annotated this time, as the diagnostic features are basically the same in both sexes. 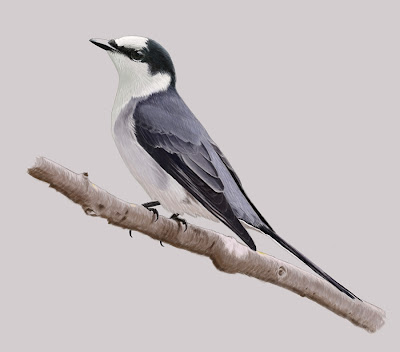 The things to look for are:
1. Brown wash on the back and rump
2. Brown wash on the underparts (males sometimes have a hint of peach on the rear flanks)
3. White supercilium extending well behind the eye
4. White forehead and thin black loral streak

An additional feature of males is that the rear crown is always grey, not black.

The bill of Swinhoe's is often subtly weaker (looks thinner and shorter), though this is not always the case. At close range, the eye-ring is more extensively white on both the upper and lower crescents. That's more a point of interest than an identification feature!

I have to say that I don't think we have been widely missing these, and I doubt they are anything other than very rare. They must also be more likely in the north than further south. Having said that, minivet flocks are worth a check wherever you get the chance. Best of luck!
Posted by digdeep at 2:23 pm

Thanks Wong. I enjoyed the learning experience!

will keep an eye on them, excellent illustrations.