I made a couple of trips to the mainland this past week to try to catch up with the Brown-headed Gull flock before they leave. The first visit was in the afternoon - forgot that the sun would be in my eyes, and the tide was too high to boot, so only saw half a dozen birds distantly.

The next trip, the light and tide were perfect, but the birds forgot to show up - perhaps they're already on their way north. Below are some bits and pieces from the two visits. 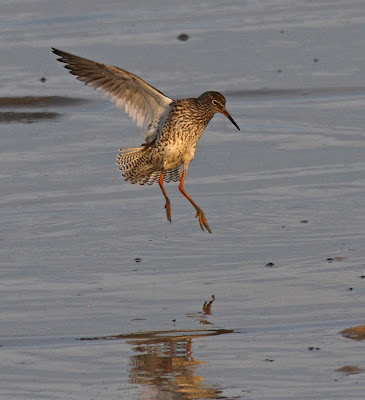 There were around a hundred Common Redshanks at the mouth of the river - this was one of the few in any semblance of breeding plumage. Most of the breeders are gone by now. 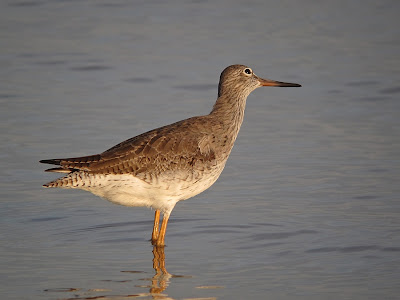 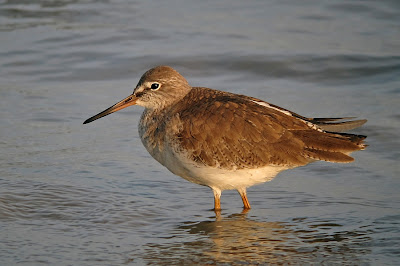 Most birds look like this - very washed out colours. These are immature birds that won't be breeding this year. Check out the leg colour! 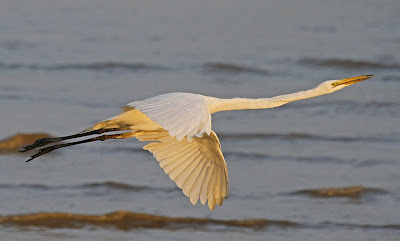 I'm taking more of an interest in these since Chris Kehoe pointed out a possible 'alba' Great Egret in Wong Tsu Shi's blog here (the gigantic one!). This is potentially a new taxon for Malaysia. In Birds of East Asia, Mark Brazil notes that alba is perhaps specifically distinct from modesta (which is the one we get here in large numbers) and is an increasingly observed winterer in Japan and Korea, while modesta winters further south. Alba is larger than modesta and, in the non-breeding season, has pale or bright yellow tarsi and toes, as opposed to the all black legs and feet of modesta. So a bigger-than-usual Great Egret in these parts should be scrutinised, and if possible, photographed alongside others. 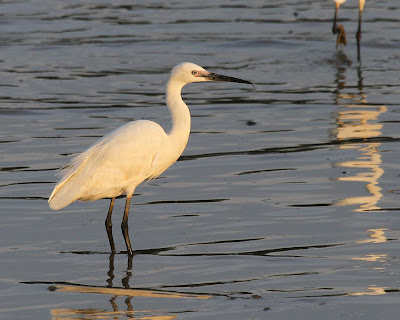 A Little Egret sporting groovy pink lores! This is a breeding condition feature, interesting, given that the bird lacked head plumes. 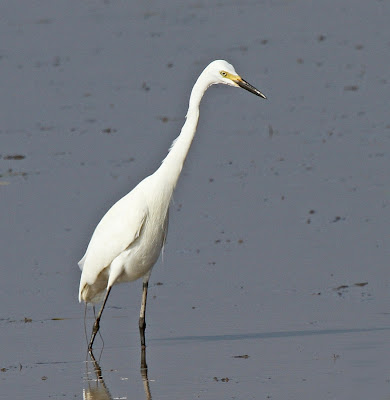 And an Intermediate Egret with breeding-coloured black bill. This species is Malaysia's most recently discovered breeding species. Take a look at Amar's fantastic series of photos documenting this extraordinary find on OBI (here and following). 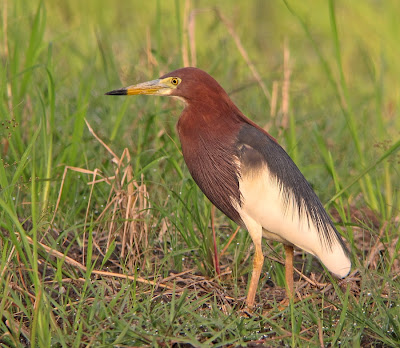 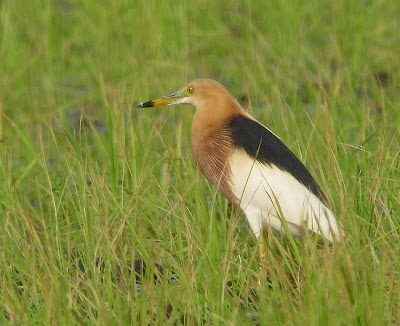 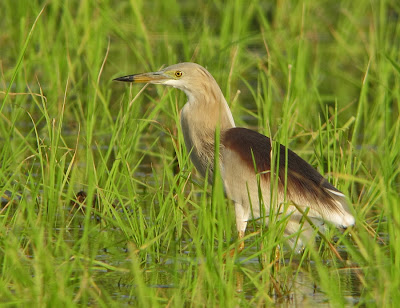 This is the best time of year to tick off the pond-herons, and the Teluk Air Tawar area is one of the best places to do so in Malaysia. Top to bottom - Chinese, Javan and Indian Pond-herons. 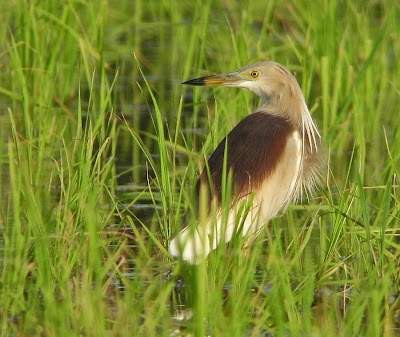 The latter was only recorded for the first time in the country in 1999, but now it's a regular, and has appeared in west coast states as far south as Selangor. Something is definitely afoot with these herons! 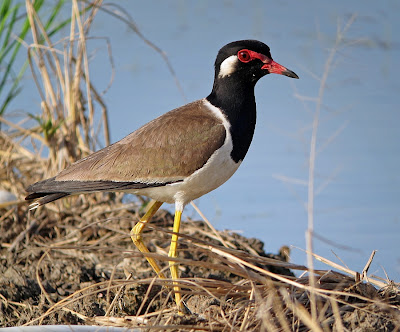 This lone Red-wattled Lapwing is probably a sick bird, as they rarely occur singly, and it's largely lacking the  vibrant colours, including the beautiful purple and green iridescence on the scapulars and coverts, of a healthy bird. 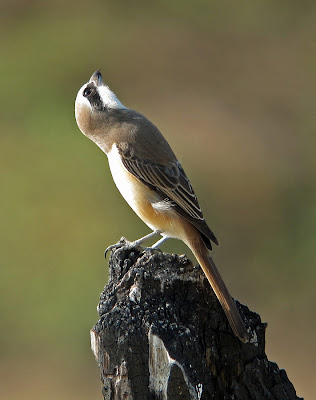 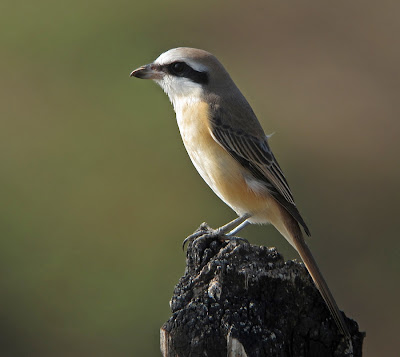 I think this is a male 'confusus' Brown Shrike. 'Confusus'  is apparently an intergrade between cristatus and lucionensis. Anyway, it's a good description of my state of mind after reading Tim Worfolk's 2006 paper! I recently came across this extraordinary record of Brown and Tiger Shrike hybridizing in Korea (scroll about half way down). No wonder they confuse us! 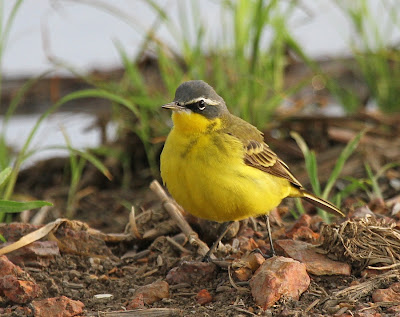 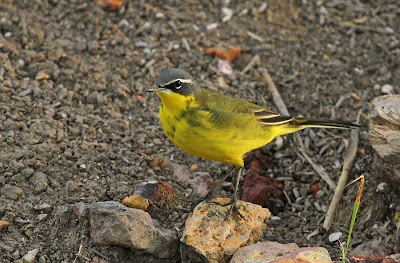 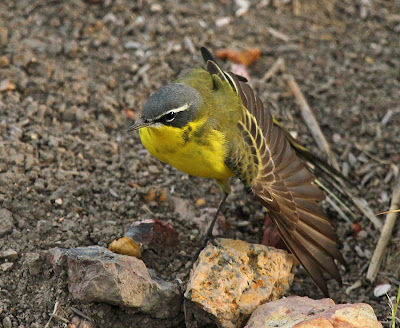 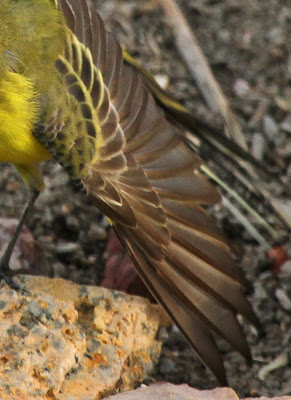 It's interesting to see that there are old unmoulted marginal coverts on the leading edge of the wing, and that only the inner 'half' of the greater coverts are fresh feathers. However, I'm not sure what this means, and am hoping that someone can enlighten me! 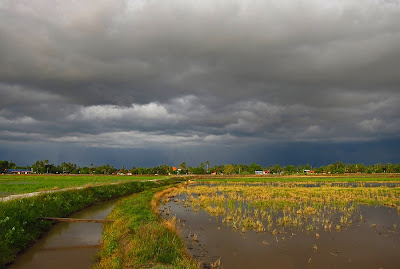 Where the wagtail was - sunlight under thunder clouds over paddyfields - a visual treat!

Interesting, guess its worth to look out, need to figure out the useful features to distinguish the "alba" and "modesta" which is getting popularly accepted as 2 distinct species.

Seeing your link on the hybrid shrike, that is interesting, provided that an odd shrike was seen in Singapore: http://www.besgroup.org/2012/04/19/an-unknown-shrike/, although it looked much like a Brown Shrike, the coloration resembles an adult Tiger Shrike minus the barrings on the upperpart and yellowish tone to the underpart. Another photo that caught my attention was the modesta and alba Egrets standing side by side and modesta looked so tiny beside the alba!!! Almost like comparing a Little/Intermediate Egret to a Great Egret (modesta) here in Malaysia, not sure how much the viewing angle is fooling us or we are looking at a very realistic comparison? From the figures, it doesn't seemed to had been of such great difference unless we are looking at a smaller/younger modesta beside an adult male alba approaching the maximal limits of the taxa? Anyhow, these almost visually identical pair will be another interesting subject for us to look at.