This means, rather amazingly, that the juveniles have to navigate their way southwards without the benefit of guidance from birds that have travelled the route before.

In Malaysia, in my limited experience, the first juveniles turn up three weeks to a month after the first returning adults.

In a study I did 2 years ago, Lesser Sand Plovers were the first juveniles to arrive - around the end of August, followed by Greater Sand Plovers in the first week of September. These two species breed quite well south of the majority of northern breeders, a factor which may have something to do with their earlier arrival. Curlew Sandpiper, Ruddy Turnstone and Common Sandpiper juveniles arrived in the third week of September, and and juveniles of most other species by the last week of that month.

How does one go about telling juvenile waders from adults? It is easier with some species than others. Generally, the larger plovers, curlews and snipe are rather tricky, whereas smaller sandpipers, shanks, and godwits should be quite obvious given good views. For details on how to tell the difference between juveniles and adults, you need to get a decent field guide to birds of the region. I find Robson's Birds of South-east Asia one of the most accurate, though the large selection of birds illustrated can be confusing to the beginner.

In many species, juveniles have more highly-patterned upperpart feathers than adults. The scapulars are smaller than adults, which can make the wing coverts more visible. 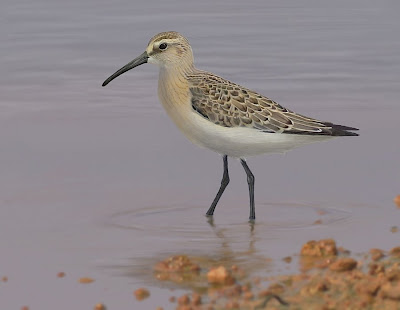 Continuing with the theme of Curlew Sandpipers (see Part 1 here), fresh juveniles often have a gorgeous pale peach or buffish wash to their breast and upperpart feathers. Note also the distinctive dark 'arrowheads' on the larger upperpart feathers - the scapulars, tertials and greater coverts. These will become darker and more obvious as wear takes place. Juvenile Red-necked Stints have similarly-patterned scapulars (hint - scapular pattern is one of the key things to look for when trying to identify waders!) 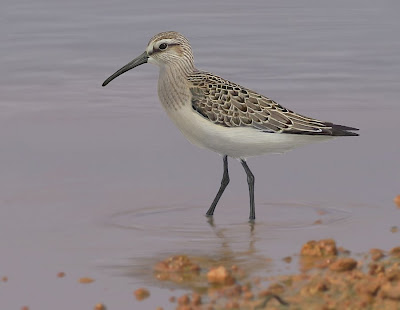 The initial effects of wear can quickly make a big change to the appearance of juvenile Curlew Sandpipers. The peach-buff colour quickly wears away, making the bird look much more grey. The dark parts generally become darker and the pale areas lose their colour, becoming either grey or whitish. 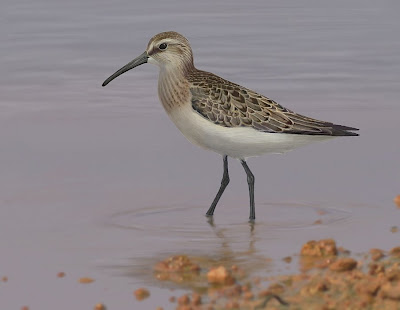 As abrasion continues, pale feather fringes wear away, and the colour of the bird darkens, making it more nondescript. By this time, the bird is ready to undergo its first moult - into '1st winter plumage'. But that will have to wait for another post!


You can see a similar process at work with these juvenile Lesser Sand Plovers. Both pictures were taken at the same place on the same day, 8th Sept 2006 - see here for the proof! The lower bird is much more worn than the upper one, and in fact it may have started its moult into 1st winter plumage (the crown?).

This variability can be confusing, but understanding the process of feather wear and how it affects the bird's appearance is an important key to making sense of it all. For a helpful explanation of moult in waders (though with a British bias), see this article by Keith Vinicombe.
Posted by digdeep at 5:13 pm