Feather wear and moult in Waders 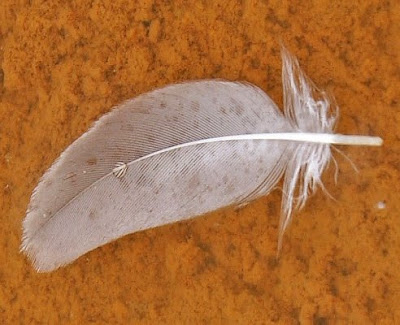 It won't be long before we start seeing the first returning waders coming south from their breeding grounds in Northern Asia, so I've been putting together a few graphics to explain a bit about feather wear and moult, which can cause confusing variation to the budding wader watcher!

Feathers are damaged by a variety of natural factors - water, wind, sunlight, time - to name a few. Waders, which live in the exposed environment of coastal mudflats and sandy shores, and undertake long-distance migrations, are particularly likely to experience feather damage.

Naturally-occurring damage to feathers is known as 'wear' or 'abrasion'.

Parts of the feather which have no pigmentation (white) or light colouring are weaker than parts with dark pigment, so they usually wear away first (you can see the same effect with old flags - the white parts disintegrate before the coloured parts).

The dark areas of the feather may initially grow darker as pale areas are lost, but eventually grow paler, as a result of bleaching.

As feather wear affects almost all exposed parts of the bird, it has a major effect on the appearance of a bird's plumage.

Here's a scapular from a juvenile Red-necked Stint. Click on the image to see how wear affects its appearance.

The white tip wears away first, followed by the pale feather edges. The feather shaft is much stronger than the 'vanes', so eventually protrudes from the rest of the feather like a spike.

Here's a Wood Sandpiper's tertial. Click on the image to see how wear affects its appearance.

In this case, the white areas are in 'notches' along the feather fringe. As they wear away, the feather becomes indented. A bird in fresh plumage will appear speckled, while a worn bird looks much plainer and darker. 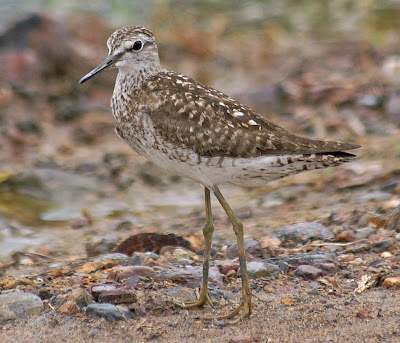 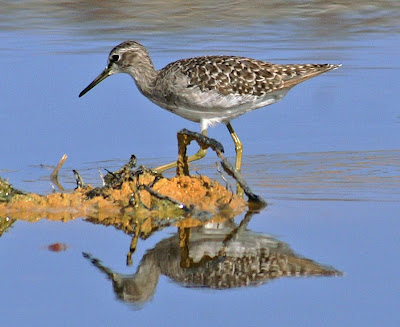 Here are photographs of two Wood Sandpipers at the same location, taken just 9 days apart - on 20th August and 29th August 2007. The upper bird is in extremely worn breeding plumage, so looks quite brown and plain. The lower bird has mostly moulted into fresh non-breeding plumage, and so shows lots of whitish speckles on the plumage.

Because feathers naturally wear away with time, and also for other reasons, birds periodically replace their feathers. This process goes on throughout the year, but is primarily concentrated in two seasons - pre-breeding and post-breeding.

For a fully mature adult bird, the pre-breeding moult occurs early in the year, before or during northward migration. This moult results in 'breeding plumage.' Here's a Curlew Sandpiper in fresh breeding plumage. 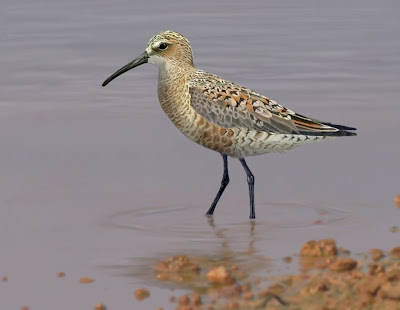 Notice that this moult involves a change of body feathers only, plus, eventually, the tertials and a few coverts. Therefore the majority of wing feathers are quite worn, contrasting with the fresh, pale-fringed body feathers. 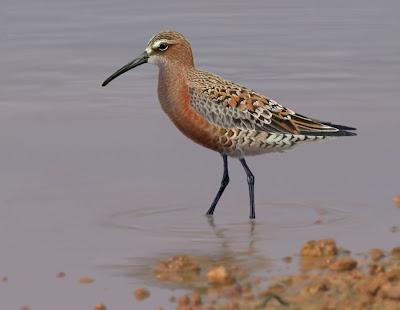 Though there is some further replacement of feathers, such as the tertials, inner greater and median coverts and around the chin, most of the change of appearance here is caused by feather wear. As the pale feather fringes wear away, more of the richly coloured feather bases are exposed, causing the development of brighter overall colouration. 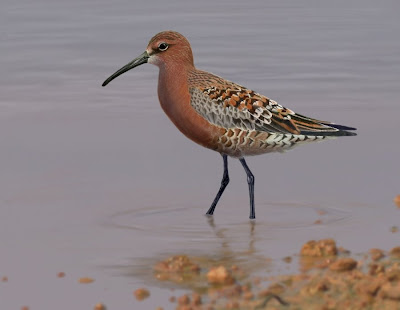 Again, relatively little feather replacement has occurred; most of the changes are due to feather wear. This bird is now in peak plumage ready for breeding. 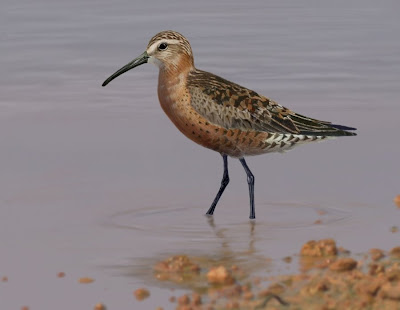 Post-breeding head moult has begun, and a few non-breeding feathers can be seen growing around the breast, while the rest of the plumage is showing the effects of bleaching and extreme wear. 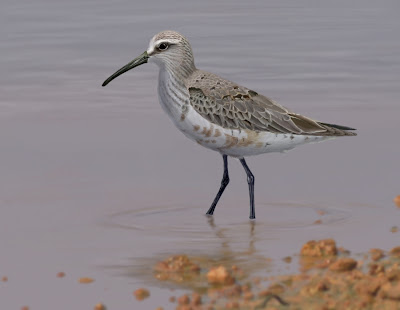 Post-breeding moult occurs pretty rapidly as birds migrate southwards. Here only a few flank and belly feathers, mantle and scapulars, a tertial and the primaries remain of the old feathers. Note the pale fringes of the freshly-replaced feathers. 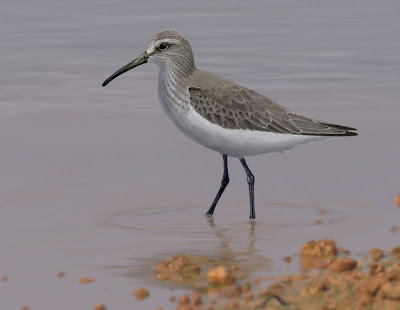 The post-breeding moult involves the replacement of body, wing and tail feathers, so the primaries are now new. Notice how the condition of the tertials affects the apparent primary projection. Wear continues on feathers moulted earlier (the fringes on the head feathers have now largely worn away). The bird's plumage is now perfectly suited to the muddy colouration of its non-breeding habitat. Eventually this plumage gives way to fresh breeding plumage and the cycle continues.

To see the whole process, please go to this link.
Posted by digdeep at 12:12 pm

Some great pictures there, the waders will be passing through here in a few weeks.....

Those Wren Babbler shots were great.

Great write up Dave! Is that your own paintingfor the moulting Curlew sandpiper? What a beauty!

Yes. I'm working on a juvenile moulting to 1st winter next, hopefully in time for when they arrive!

Tx David for your detailed writings.

Excellent work there on the moult of waders. Thanks for your great effort.