I finally managed to get a couple of hours birding in on my drive back from KL to Penang yesterday.

I had two goals. One was to try look for nests of mystery swiftlets Kim Chye, Connie and I caught while doing the whistling-thrush project field work in May 2009. 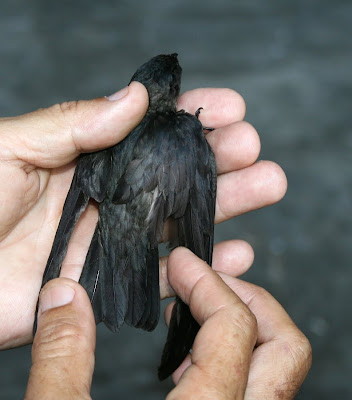 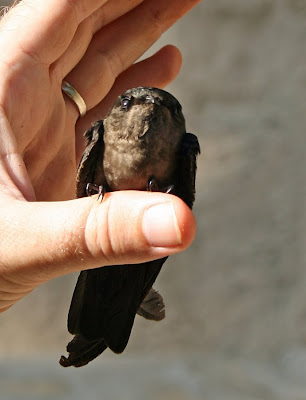 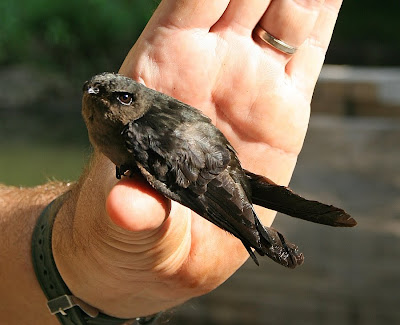 In May 2009, we caught a number of these birds in nets we had set up to catch whistling-thrushes in caves. They are very dark - the rump is blackish and concolourous with the rest of the upperparts, and the underparts are dark brown. The extent of tarsal feathering and measurements all indicate that these birds are most likely Mossy-nest Swiftlets Aerodramus salangana, a species which breeds in West Sumatra and Borneo but has yet to be recorded in the Peninsula. The nest is, as the name suggests, made of mosses and other vegetable matter, and is usually sited on a ledge in a cave, since the saliva is not sticky enough to attach the nest to the roof of a cave. For an idea of what the nest site looks like, have a look at this pic.

Anyway, frustration - no sign of either swiftlets or nests. Despite my own personal blank, the birds continue to be seen regularly, so I am quite sure they are breeding somewhere in the Ipoh area. So - Ipoh birders - your mission, should you choose to accept it - is to track down this potential new breeding species for the Peninsula! In the field they should be easily distinguishable from the typical Germain's Swiftlets by their all dark rump and dusky underparts (so they may appear all black).

My other goal was to check up on the Blue Whistling-thrushes we colour-banded back in May 2009. I have been busy over the last month writing up the final report on the project, so I've been thinking a lot about these birds lately! 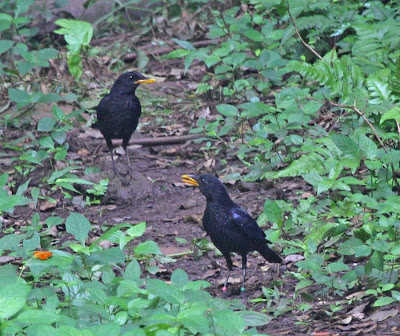 It was good to see one of our colour-banded males and his mate busily feeding young. We sexed him on the basis of his brighter, richer plumage colours and more extensive metallic spangling compared to his mate. 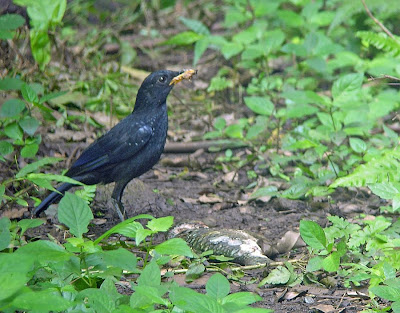 I found that he was regularly returning to the same spot to collect... fish for his offspring! Looks like I need to re-edit that report to add another food item! 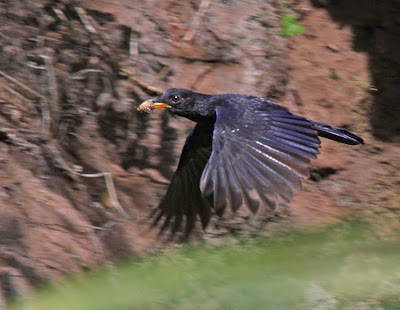 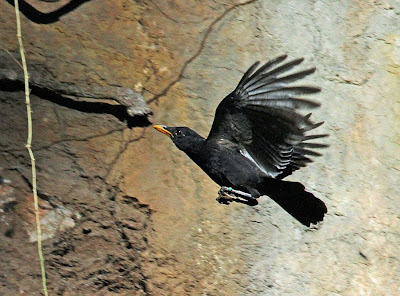 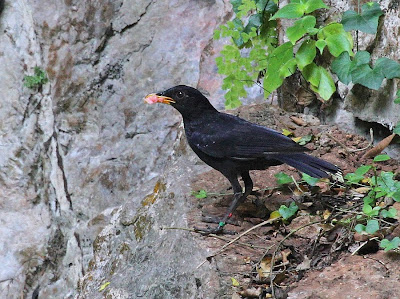 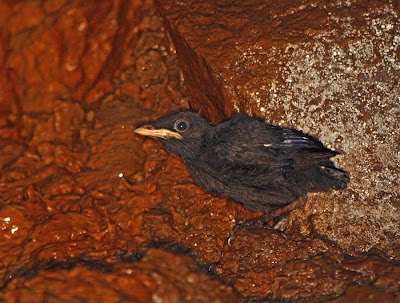 And here's the lucky recipient!

I got a lifer today - not a bird, but a dragon! 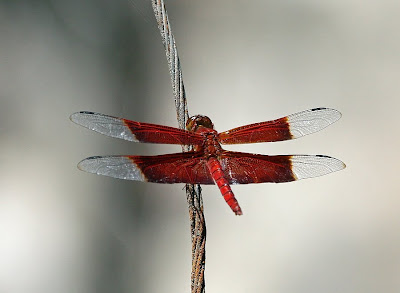 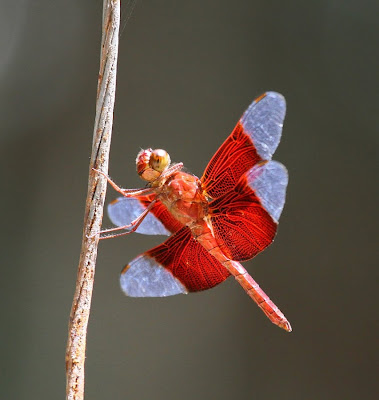 What a beauty! This is Camacinia gigantea, which looks like several much commoner Neurothemis species but is much bigger. Apparently it's quite rare. 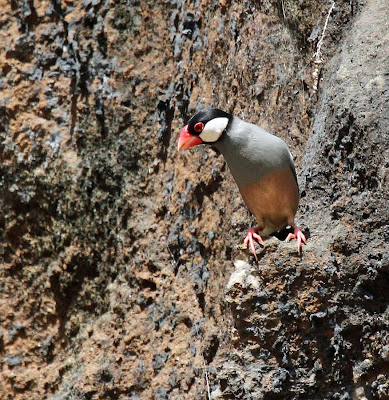 There were also some Java Sparrows about. Before I got married (in fact, as a condition for getting married!), my wife-to-be insisted that I show her a Puffin. I had to take her all the way to Anglesey in Wales, UK, to meet this condition. Just in case there are any other poor fellows out there in a similar predicament, and short of cash, you could try taking her to Ipoh and showing her a Java Sparrow...

...she might just be fooled! Thanks to George Diko for permission to use his great Puffin pic. More of George's pics can be seen here 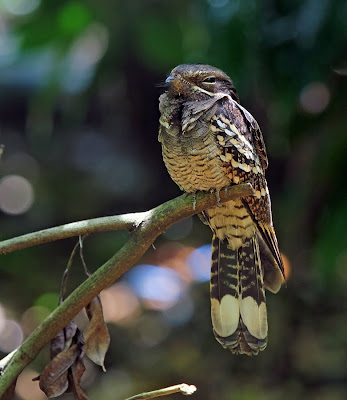 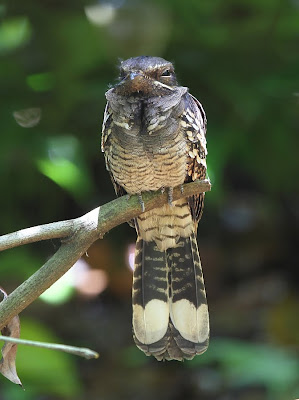 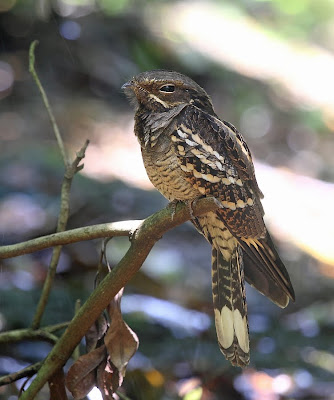 Finally, I had the good fortune to photograph this roosting Large-tailed Nightjar. From the size of the whitish tail tips, comparing them with this pic, I would say that this bird is a female. 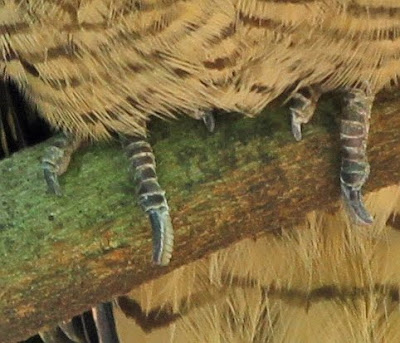 Here you can see that the middle claw is strangely curved and has what appears to be a comb along one side. This is not a deformity, but a special adaptation possessed by some birds, such as nightjars, herons and some owls. It's known as a pectinate claw, and is thought to be used to help with preening. 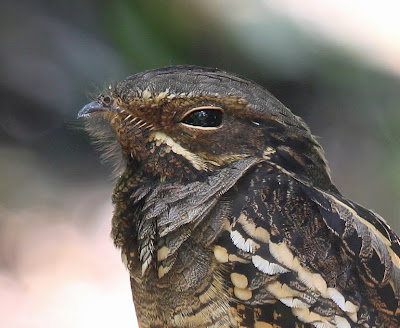 Excellent shots of the Nightjar, Dave.

Very interesting Dave on the Mossy-nest Swiftlet, I believed the lack of specimen and the general ignorance of this group of bird is generally how a bird described as "we caught a number of these birds in nets" that makes it felt so common, how many were actually caught? That would be an interesting bird that I will try looking for around my patch in Ipoh but to see the rump color will definitely be extremely challenging as I get more chances of viewing bottom up, rather than top down, because Aerodramus swiftlets are usually more abundant when clouds are thick and dark, it is very difficult to see the rump color even if I get sideview of the birds, I cant confidentally tell whether they were bright or dark.

So now, we have 3 similar swiftlets to look out in the Ipoh skies, the bright rump Germain's, intermediate rump Himalayan and dark rump Mossy-nest. Probably next to find is the Black-nest.

I was vague on the figures because without referring back to my notes I cannot remember (I'm not at home just now)! But if I remember correctly, we caught one at Kek Lok Tong and six at nearby Purelands, Taman Saikat. This was in May 2009.

The best time to observe swiftlets is early morning or late evening when they come down lower. Places to check are caves and ponds, where they come down to drink

ok will keep an eye if I had the chance to see low flying swiftlets... Will also try to look for some here in Kampar, we had many Germain's here as well....

I think it is worth to be recapture again to extract some blood and cell samples to study the taxonomical placement of the bird, it is very possible that it is a new undescribed subspecies that is probably endemic to Peninsular Malaysia?

I had recently seen a pair of such largish red dragonflies that resembles Camacinia gigantea at my patch, which is true, similar to the common Red Grasshawks but larger, I dont think I manage to get any pics, I can also find the black Swamp Grasshawks at the Shrike's Field nearby.