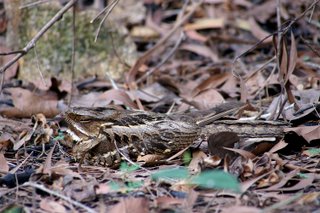 There's a beach near our home which is popular with local people. It also has a small lake and some scrub around it. Last year I found a Large-tailed Nightjar using the area as a daytime roost, and this year, I have found that they are nesting there. Even when you know that the bird is there, it is amazingly hard to spot, as their cryptic plumage blends in perfectly with their surroundings. 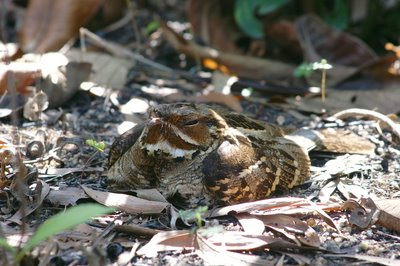 My first visit was on March 23, when I discovered the male sitting on two eggs. By the end of the month I found parts of an eggshell where the nest had been, and the adult bird was sitting in a different place. I assumed it was sitting on the young, but did not see them. 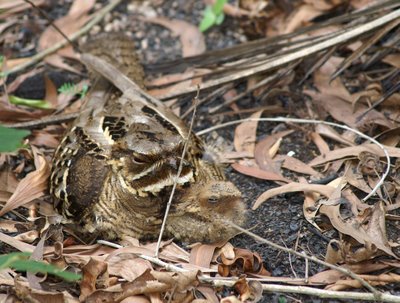 On April 4 I went back again, and this time found the female sitting. Through the morning she moved several times, presumably to move away from the direct sunlight. The male was also in the area, flying around in daylight, and occasionally calling. I wondered whether he was hunting for food to feed the chicks. I finally spotted one of the chicks - still very young with the first signs of adult feathers still 'in pin' on the top of the head.

Posted by digdeep at 9:57 pm No comments: