I received a helpful email from Killian Mullarney pointing out that the jaeger I had labelled as Parasitic here was in fact a 2nd calendar year Long-tailed.

He outlines a number of pointers to the correct identification:

1. If you compare the underwing pattern [with this bird] you will notice that the Arctic [Parasitic] has a typically large, white 'flash' on the undersides of the primaries, whereas the bird in question has a much more restricted flash, seemingly barely extending to the outermost primaries. The restricted white flash is, as I'm sure you're aware, a strong pointer to 2nd calendar-year Long-tailed, reflecting the fact that, unlike Arctic, adult Long-tails lack the flash entirely [in adult plumage].

2. The Long-tailed also has a much whiter and apparently unbarred rear underbody.

Here are some more pictures of the bird: 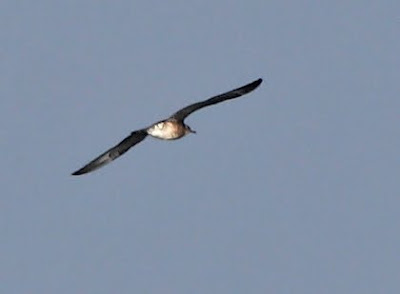 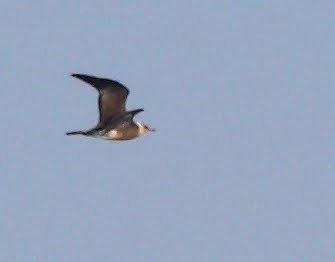 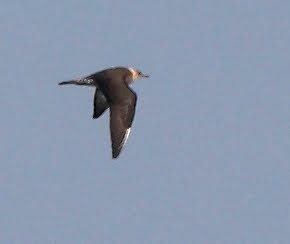 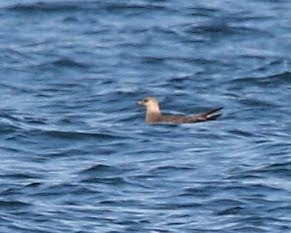 In retrospect, a more careful inspection of my pictures would also have revealed the following pointers toward Long-tailed Jaeger:

Still, I learnt more by making a mistake than I would have done by getting the id correct first time!

Incidentally, the PM500 Club now has its first 5 members. Scroll down to the bottom of the page if you are curious to know who!
Posted by digdeep at 5:31 pm 1 comment:

The rules are simple:

2. The Club recognizes only the taxonomy followed by the 2010 Checklist of the Birds of Peninsular Malaysia. So if you haven't yet bought a copy, go and buy one!

3. If you see a species not yet on the checklist, you are allowed to count it provided you have submitted a description to the MNS-BCC Records Committee and the record has not been rejected.

4. Members are expected to be honest! No-one's going to check your list!

The logo of the 'PM500 Club' is the Grey-breasted Babbler. It's happens to be the 500th bird in the current checklist, and it's also a 5-star resident rarity, so is a fitting logo for the 500 Club. James Eaton has very kindly agreed to allow the use of one of his photos for the logo.

That's about all I can think of to say about it for now. If you'd like to be considered for membership in this exclusive club, please send me your Peninsular Malaysian list, provided it's over 500. Hopefully I can persuade all the 'sifus' to divulge their lists!

So, to kick off, my PM list currently stands at 547. Probably the easiest birds not yet on there are Common Buzzard, Grey-and-Buff Woodpecker, Brown-streaked Flycatcher and Thick-billed Flowerpecker. And, no, I've not seen Grey-breasted Babbler!

New Checklist of the Birds of Peninsular Malaysia 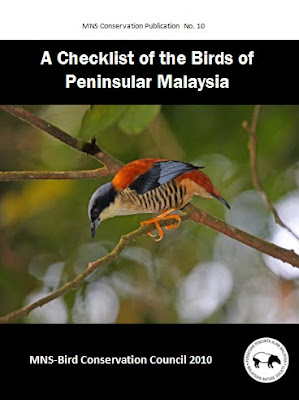 The new Checklist of the Birds of Peninsular Malaysia is now on sale at the MNS Bookshop, priced RM30 for non-members and RM25 for members. The checklist includes all birds species accepted up till the end of December 2009 (the most recent being Pied Cuckoo).

A quick summary of facts on birds of PM:

QUICK FACTS on the Birds of Peninsular Malaysia

On our final site visit we were pressed for time to visit all the potential HCV areas, as there are a number of Forest Reserves in the area. In the end, we visited two: Bukit Jemalang Permanent Forest Reserve and Sungai Cherul Forest Reserve, and they could hardly have been more different in terms of their management.

Bukit Jemalang is apparently gazetted as Permanent Forest Reserve, yet within our short visit we saw areas cleared for orchards, oil palm and a landfill site! It has some nice peat swamp habitat left in it, which is still apparently home to some large mammals, but surely its days are numbered. Apart from this sign we saw no signs of enforcement and plenty of signs of encroachment.

Nannophya pygmaea is a peat-swamp loving species and the smallest dragonfly to be found in Malaysia.

The distinctive four-toed front footprint of a Tapir.

A Banded Broadbill sat on an uncharacteristically exposed perch - too bad I didn't have my digiscoping gear with me!

It was joined by a Puff-backed Bulbul. There were good numbers of this swamp forest-loving species here.

I still wasn't able to get a good photo though!

The other forest reserve, Sungai Cherul, has forest rangers permanently stationed on site, and is protected as water catchment forest. In consequence, it appeared to be in excellent condition and full of birds, among them, Banded and Garnet Pittas and Malaysian Peacock-pheasant.

There was certainly a healthy population of Wild Pigs.

They were very active in daylight - some unaware of our presence...

... others definitely knew we were there! 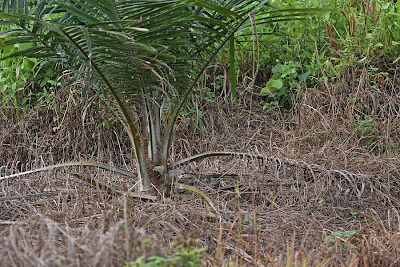 Some of the forest occupants were feeding opportunistically in the adjacent plantations - this is porcupine damage. 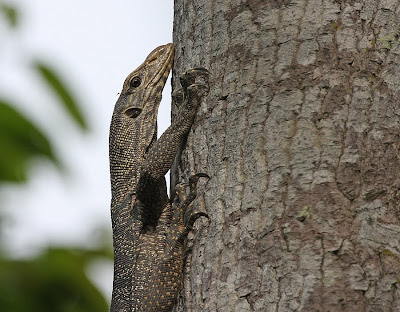 The monitor and the mosquito! We spotted this Clouded Monitor resting high up a tree, but he still couldn't escape the mozzies!

This is one of the rarer dragonflies - Ryothemis obsolescens - which was seen in swarms at canopy height.

We again recorded 87 species of birds, but only a few consented to be photographed!

A Sooty-capped Babbler - the commonest babbler in the forest.

A pair of Spotted Fantails were attending a nest.

This female Raffles' Malkoha was foraging for spiders.

Our night surveys were a bit disappointing bearing in mind all the mammals we'd seen evidence of by day. This was a roadside Large-tailed Nightjar.

I think this is Limnonectes blythii, otherwise known as Blyth's Giant Frog. Please correct me if I'm wrong! 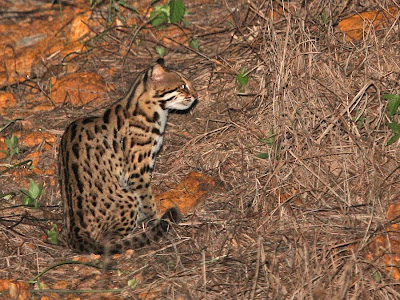 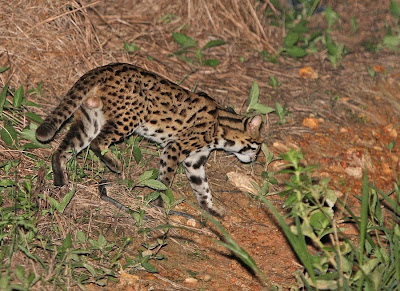 This male Leopard Cat was rather obliging! 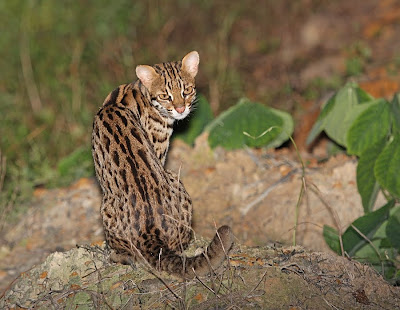 Fur looks so much better on a cat than on a catwalk!
Posted by digdeep at 10:26 pm 3 comments:

Our second site visit took us about 40 minutes' drive north, to the north-east corner of Bukit Ibam Forest Reserve.

Here too we encountered a Rail-babbler, and had a little more time to try to get some reasonable views.

The bird spent over ten minutes calling from a spot frustratingly just out of full view!

It then gave tantalizing glimpses through the dense foliage as it circled round us.

In good sunlight, the colouration of the bird is strikingly intense.

But more often than not, in the semi-darkness of the forest floor, the white supercilium was what gave the bird away.

We identified these tracks as belonging to a Pig-tailed Macaque.

Some orang asli families use forest produce for their livelihood. This tree is known locally as 'pokok kuin' (Keruing (Dipterocarpus sp)). A hole has been made in the trunk to collect oil - 'minyak kuin'. The hole is first fired to 'clean out' any impurities. Then it is left for the oil to collect. Oil is harvested weekly. Two hundred litres of the oil can sell for RM600. The oil has various uses, especially as resin in boat-building.

Collecting of minyak kuin may be a sustainable use of the forest, but the levels of hunting we heard about probably are not. In one home we found this baby Binturong. It had been caught three days previously and was in a sorry state, though still quite lively and strong.

We persuaded the family to part with the animal, and we released it back into another part of the forest. This photo was taken just before release. The poor animal no doubt thought its end had come, and started wailing pitifully and struggled vigorously! Once released, it climbed a small tree and promptly curled up and went to sleep! 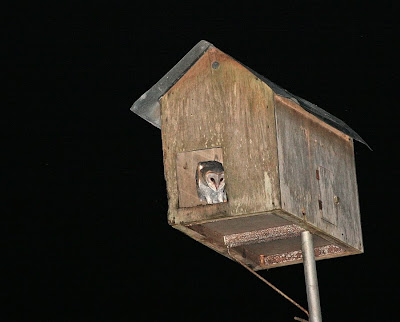 The estate had one of the healthiest populations of Barn Owls we have encountered anywhere. We counted 16 birds in one two hour nocturnal survey! 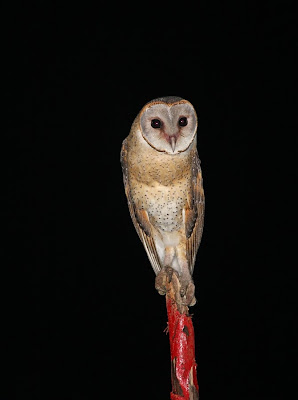 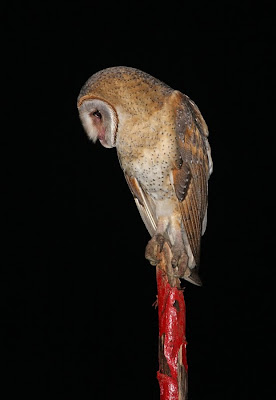 Owls are so numerous that the estate no longer uses chemicals to control rats. 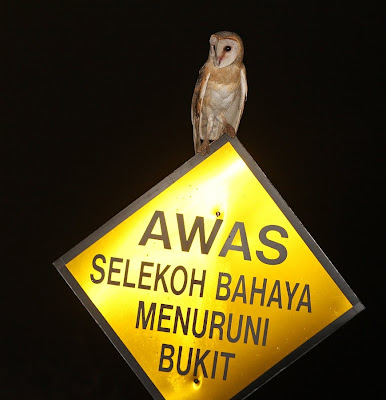 Or maybe because the estate no longer uses chemicals to control rats! 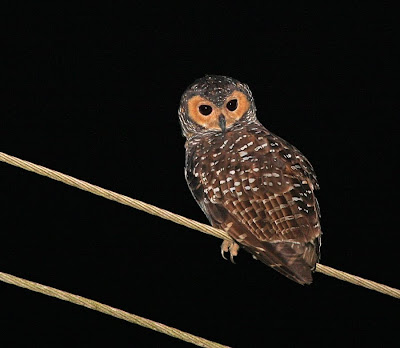 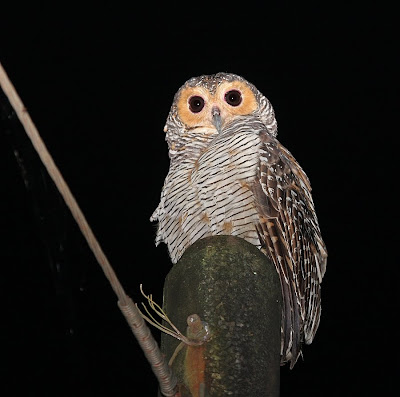 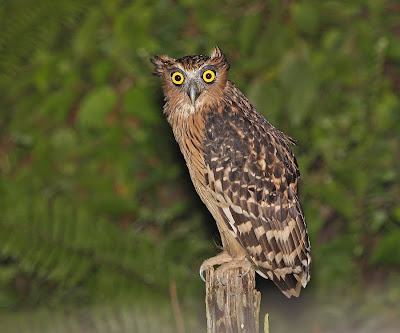 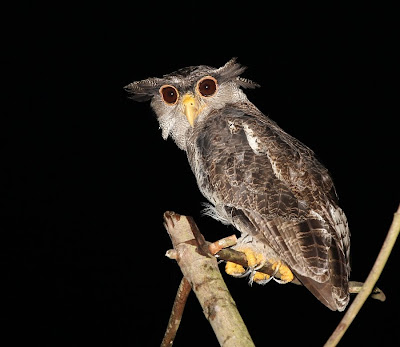 On our final morning I had chance to snap a few of the common estate species: 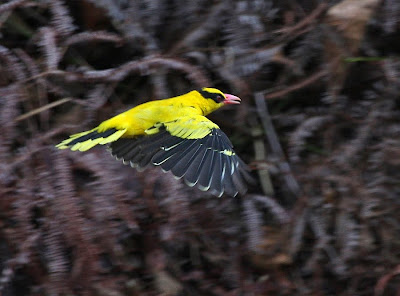 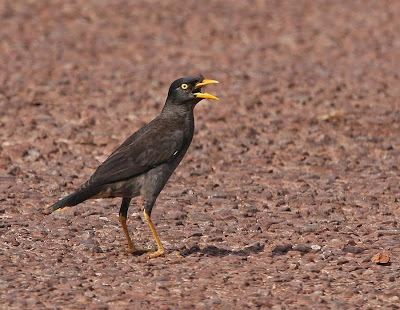 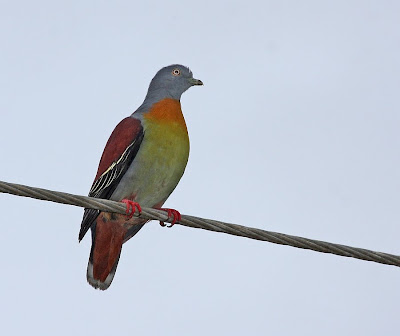 ...And a smart male Little Green Pigeon.
Posted by digdeep at 6:43 pm 5 comments: