With more and more interest in and information on pelagic birds in Malaysian waters, sooner or later, I thought, we will need to work out exactly where Malaysia ends and neighbouring territories begin!

So I spent a few hours this afternoon doing a complicated dot-to-dot exercise, mapping the coordinates from this site: http://en.wikipedia.org/wiki/Borders_of_Malaysia onto a Google Earth map. I've only managed to finish Peninsular Malaysia so far - East Malaysia will have to wait for another Sunday afternoon! 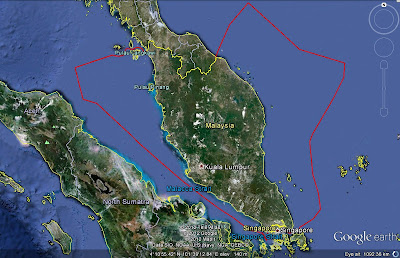 Here are the results of my labours! The entire peninsula sits on a continental shelf of relatively shallow water, meaning that we are unlikely ever to ever see any of the deep ocean pelagics (e.g. albatrosses!). Nevertheless, there are exciting possibilities for the adventurous to get reasonably far offshore and into the Andaman and South China Seas, especially off the northern state coasts.

The reason I was especially motivated to draw this map is that there have been, not one, but TWO Red-footed Boobies off the coast of Malaysia in May and June, and I was eager so see whether either qualified as a 'Malaysian bird'!

The first was seen during a pelagic survey from Singapore on 13 May. It was first sighted here: 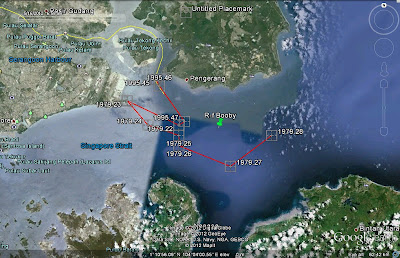 Definitely in Malaysian waters! Happily for the Singaporean observers, the cooperative bird flew over into Singapore waters too, so they could add to their national list!

The second was seen on 14 June by Peter Ryan on board the RV Marion Dufresne in the Straits of Malacca, just here: 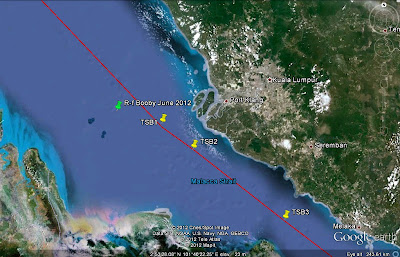 So close! Just the 'wrong' side of the border, as far as Malaysia is concerned! Peter has generously allowed me to reproduce some of his amazing photos here. 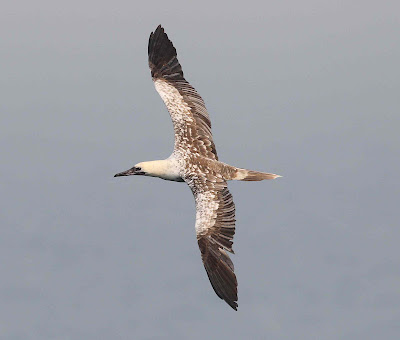 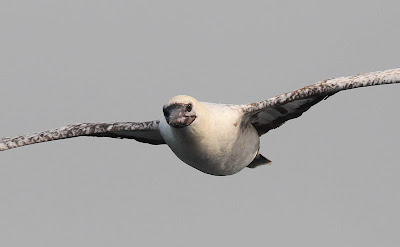 If you were expecting a dot on the horizon, you'd be wrong!This bird is a little older than the Straits of Singapore bird, and is safely identifiable as a different individual. Peter also got some enviable opportunities to photograph frigatebirds in the Straits of Malacca too (also just outside Malaysian territory). 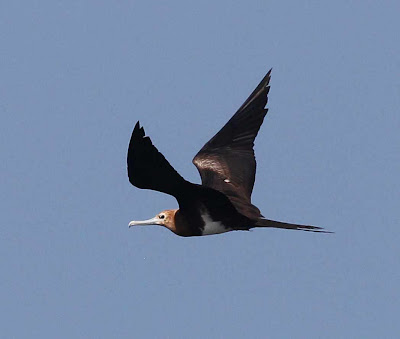 A juvenile Christmas Island Frigatebird,, identified by the ‘hexagonal’ shape of the belly patch and the white axilliary spurs pointing forward from around the middle/front of the belly patch. The small white spot on the upperwing is also supposed to be diagnostic. (thanks to Nick Brickle for supplying these helpful notes). 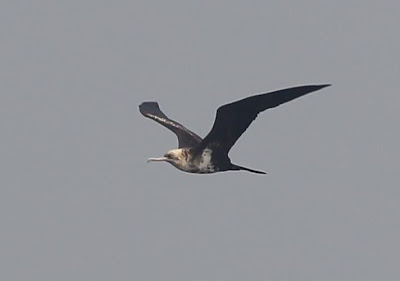 A third year female Lesser Frigatebird. Details again from Nick: a third-year female Lesser with plumage that is somewhat transitional between a Juv and an Ad female Lesser. The belly patch is heavily mottled in a way that is consistent with it becoming the shape of an Ad Fem Lesser. The axilliary spurs are prominent, white and triangular. The breast band seems to have faded and the black feathering around the bill is probably a hint of the black hood to come.

SO...an intriguing taster of what is out there. Next step - a pelagic west of Langkawi, or - the Holy Grail - out to Pulau Perak...anyone??
Posted by digdeep at 6:20 pm 4 comments: