Our friends from Brisbane were here for a few days over the weekend. We enjoyed some excellent birding together last October in Australia, so now it was my chance to show off some of Malaysia's finest for a day. 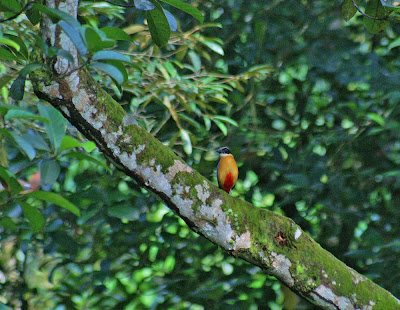 We started off in the morning whistling for Blue-winged Pittas. After a while we located a pair, one of which flew straight to us and sat in a tree almost overhead looking at us. Later on it started calling from a tree a little further away.

In the forest proper we spent some time scouting around for Blue-banded Kingfisher, and were eventually rewarded with good views of the male. This wasn't photographable, but there was plenty else that was. 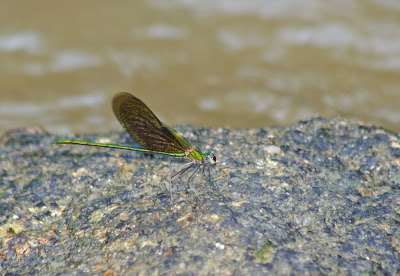 This large damselfly, a male Neurobasis chinensis, sits on its territorial rock in mid-stream, opening its wings occasionally, flashing irridescent green wing patches. Several other males occupy similar rocks nearby, and a lone female, distinguished by her reddish wings, plays it cool not far away. 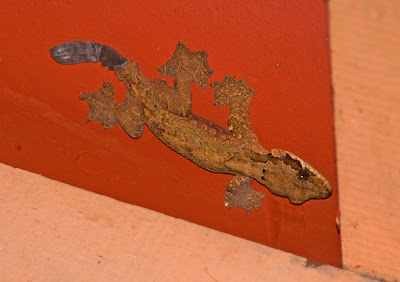 This Kuhl's Gliding Gecko has lost its original tail, and the replacement is definitely not up to the required standard! 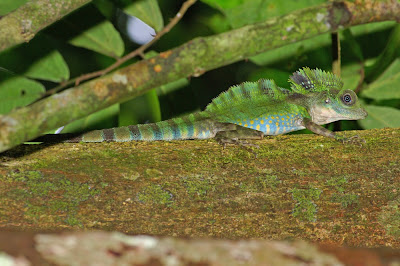 This agamid lizard is a kind of water dragon, but I'm not sure which one. In breeding condition, this male's throat will flush bright pink, adding to the already impressive array of colour. 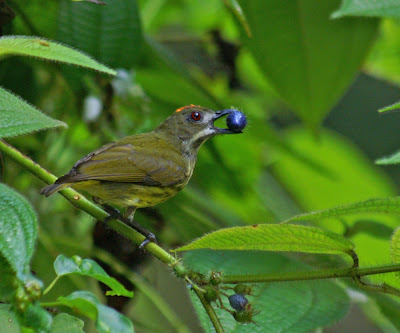 This Yellow-breasted Flowerpecker had a problem with these juicy-looking fruits - the spiky hairs at one end. 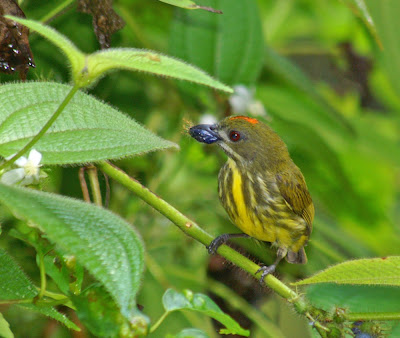 It manouveured the fruit smooth end inward, and then proceeded to suck the goodies out without eating the skin. 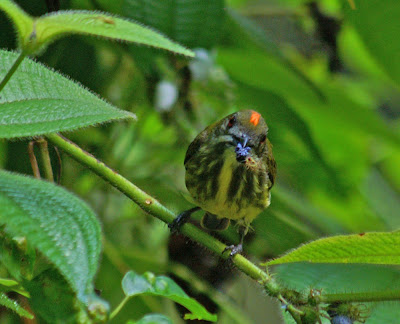 Problem solved! The skin is sucked dry then discarded.

After a good lunch we went to check up on an Oriental Pratincole breeding site. 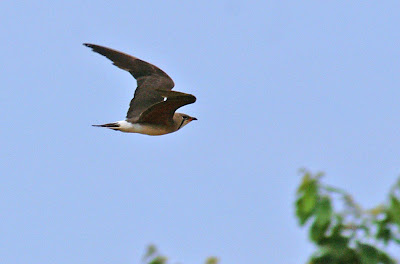 Several birds were in evidence, but there was no sign of breeding having begun yet. 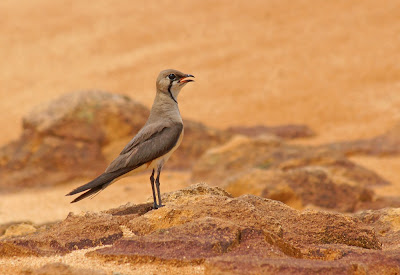 All the birds were in wing and tail moult (new secondaries, old primaries), and their plumage was generally heavily abraded. 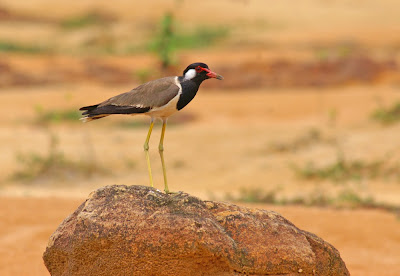 Several pairs of Red-wattled Lapwings were also present, in a similar state of wear and tear.
Posted by digdeep at 10:48 pm No comments:

It's been almost a month since my last post, and in that time I've barely been out birding... must be the post wader migration blues!

However, I did manage to get out yesterday afternoon, not an ideal time of day but better than nothing. I've written about the sad state of Air Hitam Dalam before - and highway construction continues apace, while wildlife continues to hang on by a toehold in the fragments of mangrove and swamp remaining.

Olive-winged Bulbuls are common open scrub birds - rather non-descript except for the dark eye, streaky ear coverts and olive tinge to the wings.


A male Mangrove Blue Flycatcher was a nice surprise along the boardwalk beneath some large strangling figs. It spent some time hunting unconcernedly nearby.

Interestingly, this bird has an orangey vent. Robson's Birds of South-east Asia says it should be 'pale'.

Other birds of note recorded were a very late Arctic Warbler, and Green-billed and Raffles' Malkohas.

There aren't too many places in Penang where you can see Silvered Leaf Monkey, though they are commoner further south. I caught this one in mid-leap between trees.

A Plantain Squirrel, the commonest squirrel at this site. 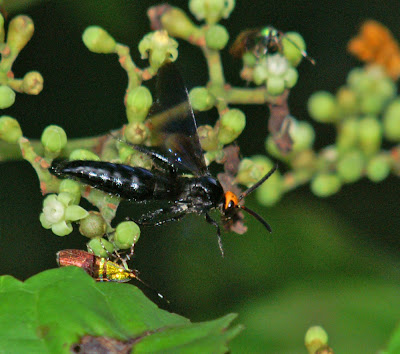 This brightly coloured wasp was competing with many other insects at this flowering plant. 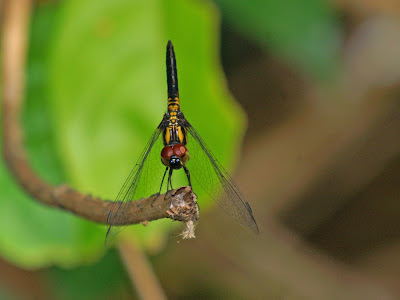 I wasn't able to identify this attractive dragonfly. Can anyone help? [This is Aethriamanta aethra. Thanks to Ian Choong for the id]

As the sun set, this Spotted Wood Owl started to call, puffing up its white throat feathers as it did so. 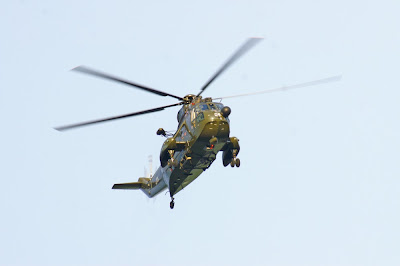 An army helicopter came to take a look! 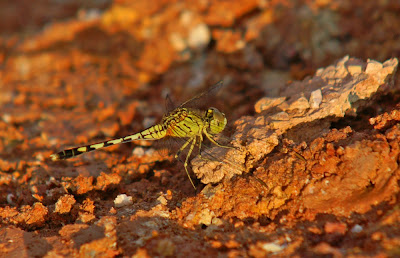 This female Diplacodes trivialis was one of several catching the last rays of the sun.

A pair of Jungle Mynas flying to roost.

A fledging Wood Owl came out to join the adult. It tried out its wings by flopping from tree to tree.

It was easy to locate as it kept up a continuous mournful mewing, sounding a bit like a Eurasian Collared Dove.

As it grew darker, a pair of Barn Owls also appeared, along with 4 Great Eared Nightjars, which flew out of the forest to hunt over nearby fields. Sorry for the horrendous image - it was the best I could do!
Posted by digdeep at 5:41 pm No comments: