This morning we decided to station ourselves at a number of places along the coast as the tide was falling, to see what we could learn about the birds' movements. I was dropped off well before dawn and positioned myself close to a high tide roost. 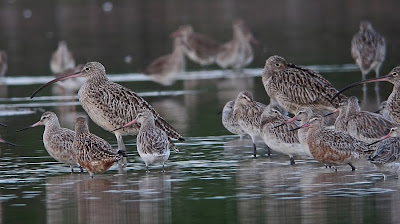 This was part of the scene in front of me as dawn broke. See how many species you can identify here (Answers below. Pic A). 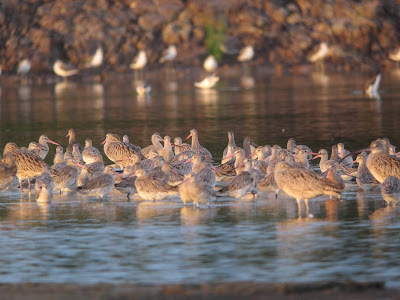 The sun appeared briefly, illuminating the flock. I've uploaded a large version of this picture, so click on it and count the species! (Answers below. Pic B) 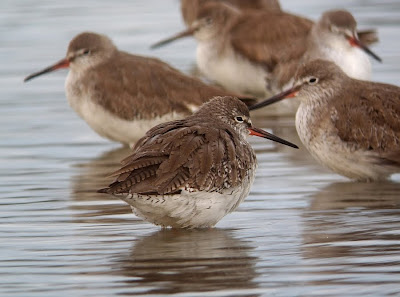 Common Redshanks. Prof Bill Hale commented on this photo: "I would say that this is T.t.ussuriensis. I think that the tertials and greater coverts are not yet fully coloured. This may seem surprising considering the development of the feather but I think that Redshanks show aptosochromatosis - defined in my dictionary (Hale et al 1988) as 'the process of colour change without moult in birds (eg. greenshank), in which fully formed feathers change colour without abrasion'." 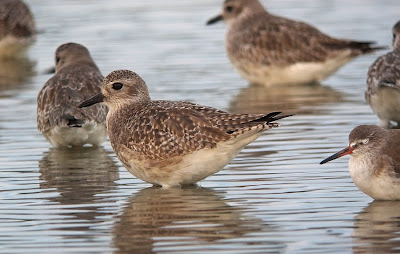 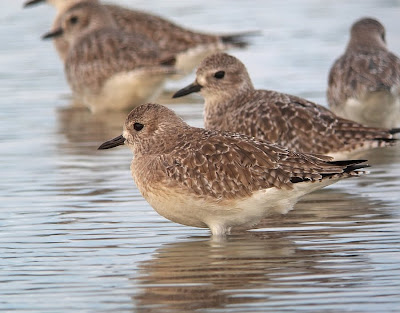 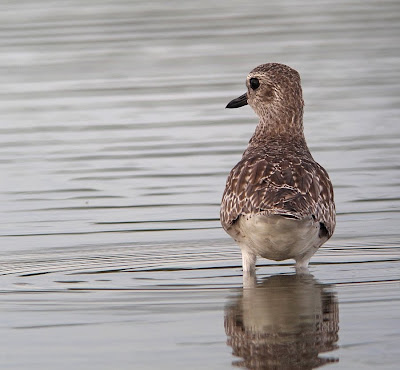 There were plenty of Grey Plovers about... 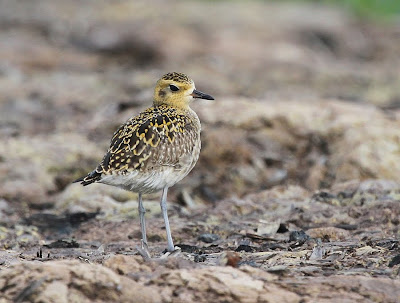 And one Pacific Golden Plover landed next to me on the bund! 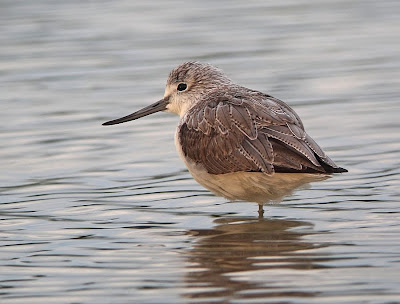 There were lots of Common Greenshanks - some close enough for some good shots. 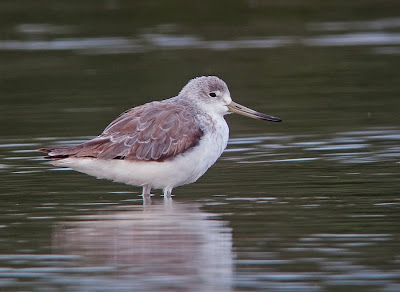 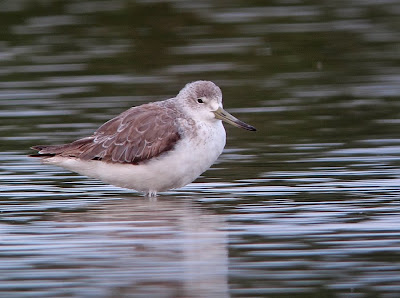 The three Nordmanns' Greenshanks present unfortunately didn't come quite as close! This bird shows a clear-cut bi-coloured, olive-green and black bill, which is a well-known feature of Nordmann's. However, Common Greenshanks can also show similarly patterned bills, such as this bird, while Nordmanns' does not always show this bill pattern (such as this bird)! So, it's good to check other features besides the bill colour. In this case, the leg length can't be judged, but note the thickset structure, small eye, pale grey, relatively unstreaked crown and breast sides, and the plain grey, pale fringed upperpart feathers, lacking the dark 'pencil marks' along the edges of the tertials and coverts (cf with the Common Greenshank above). 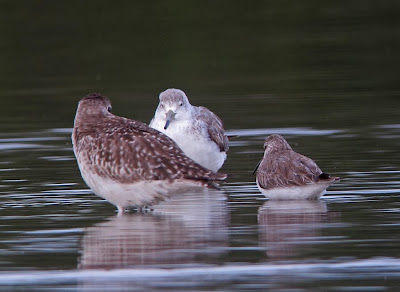 Nordmann's are very distinctive when seen head-on, with their broad-based bill and 'piggy eyes'. Can you identify the other two species? 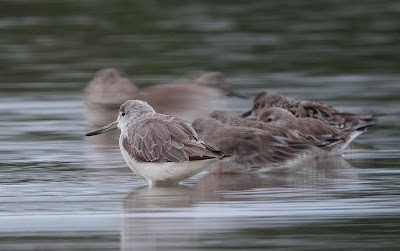 A Nordmann's with a small flock of Red Knot. 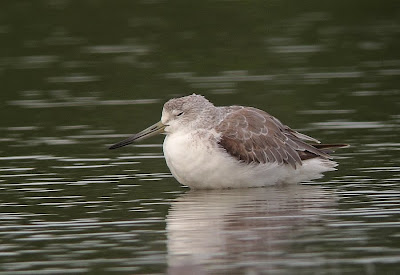 Sometimes they can look a bit overweight! 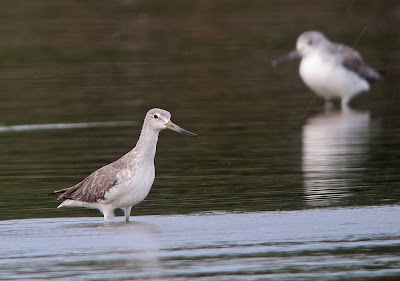 Same species, different posture (with a Common Greenshank behind). 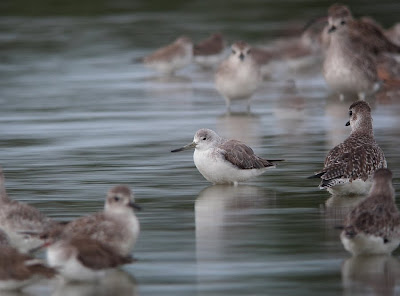 The centre of attention! 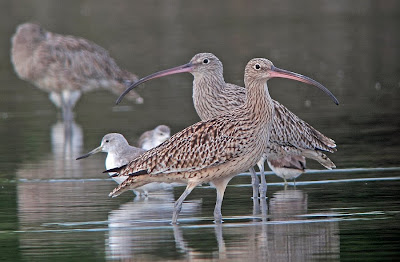 A meeting of rares! Eastern Curlews with a Nordmann's Greenshank (and 2 Marsh Sandpipers) behind. 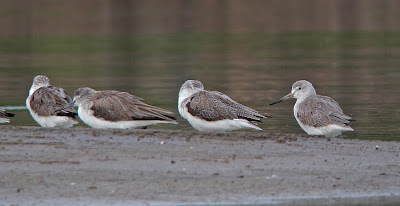 You should be able to spot the Nordmann's here!

This pic has the three 'greenish-legged shanks' - Nordmann's and Common Greenshank, and Marsh Sandpiper.

A few pictures of birds as they left the roost area: 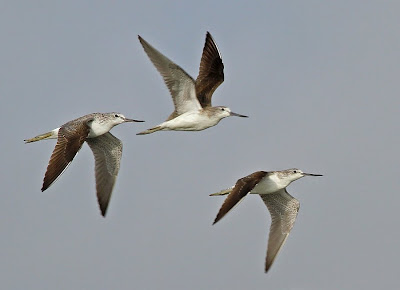 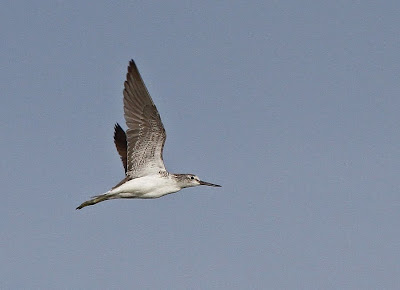 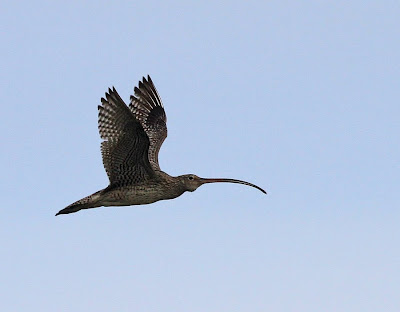 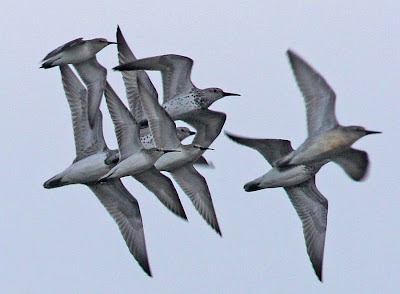 And a flock of three calidrids - Great and Red Knots, and Curlew Sandpipers. 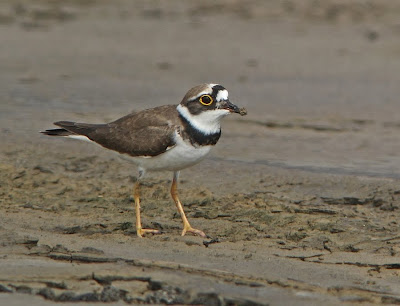 Some waders are not so dependent on the tidal cycle, preferring to feed in brackish or freshwater. This is one of them - Little Ringed Plover.

Nice to see the Nordmann's shots and the other waders.

Beside me, I have my copy of the 1986 Hong Kong Bird Report, with a paper by Messrs. P. Kennerley and D.Bakewell, which tells everything the discerning reader needs to know about Nordmann's Greenshank !

Very nice blog and pictures! I will keep my eye on it from time to time!